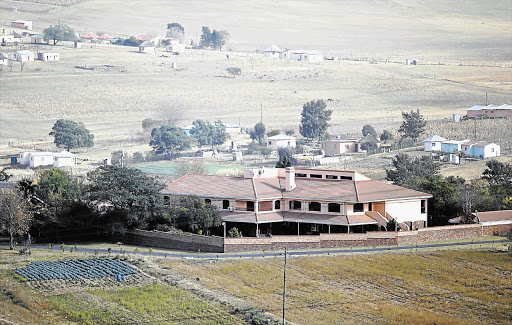 The long walk to freedom just got a bit shorter in the childhood home village of Nelson Mandela, where some of his relatives have been gifted a device to fetch water more easily.

In his autobiography, Mandela famously described the daily grind of growing up in the rural Eastern Cape village of Qunu. Now Qunu neighbours Evelyn Mandela, 82, and Nothemba Mandela, 71, can use new “Hippo Rollers” to move plastic buckets of water up from the river thanks to a charity infusion into the rural Eastern Cape last week.

“We struggle in the dry season. Carrying buckets is hard work so this is a huge help,” said Nothemba Mandela, whose home overlooks the rolling green hills and valleys also described in Mandela’s autobiography, Long Walk to Freedom. The Mandela family burial site is a few hundred metres from her home.

Qunu is just one of several remote villages to benefit from the useful Hippo Roller devices, which operate much like a wheelbarrow, designed to fit heavy water containers that can be pulled or pushed. In total 150 rollers were donated to residents in Qunu and several nearby coastal villages.

Ironically, the slog of carrying water was alleviated by a different kind of slog: long-distance swimming.

The rollers were donated by non-profit organisation Swim for Rivers, which raises awareness and funds to help address SA’s water challenges via long-distance charity swims, including swims in unlikely locations like polluted rivers and remote icy seas.

Andrew Chin from Swim for Rivers said the latest Hippo Roller donation was an opportunity “to help where we can”.

“For us it’s a privilege to serve. And it’s a travesty that thousands of rural families still struggle to access drinking water,” Chin said.

Tour guide and Qunu resident Zim Gamakhulu said water supply was intermittent and insufficient: “The taps and tanks often run dry during the dry season, so mostly women and children have to walk long distances to get water in buckets, often on their heads. These rollers are making a big difference.”

Nocingile Ndabambi, 71, from Mqhekezweni — known as Great Place, a historical royal household and grooming place for chiefs — said she walked about two kilometres to and from a river to collect water. “We struggle and this is a big help,” she said.

Ndabambi’s home is close to a rondavel where Nelson Mandela spent his teens. He shared in his book how he learnt about leadership by listening to the regent king, Jongintaba Dalindyebo, presiding over local community matters under a large tree near his hut.

The 24 Cuban engineers that SA imported at a R64m price tag to impart skills and knowledge to their local counterparts will have to work under ...
News
8 months ago

Joburg Water will restrict water supply in a number of its reservoirs because of water shortage from its supplier Rand Water.
News
10 months ago
Next Article