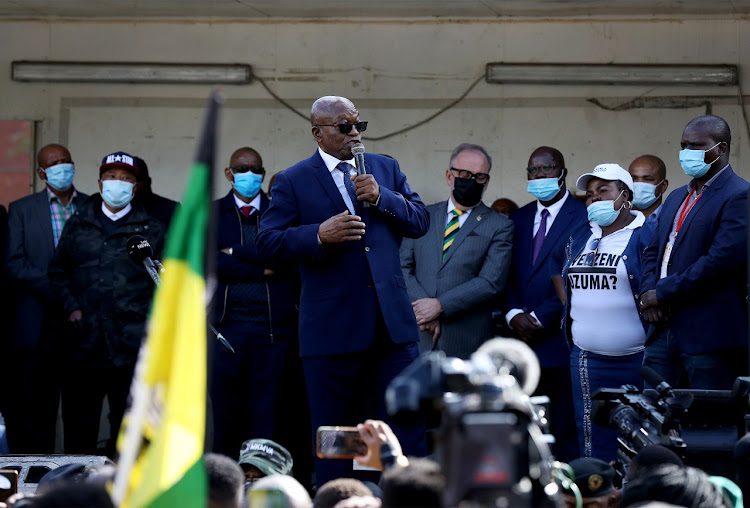 The ANC in KZN did not take kindly to the booing of its leaders outside the Pietermaritzburg high court where Jacob Zuma was appearing for his corruption trial.

So much so that they will release a report tomorrow into their investigation on who booed the provincial secretary Mdumiseni Ntuli and provincial chairperson Sihle Zikalala and where they come.

The investigation follows events that embarrassed both Ntuli and Zikalala, who were drowned by boos and chants when they tried to address the crowd gathered in support of Zuma, whose corruption trial was expected to start today but was postponed.

“You see the preliminary report that I have, the 10 if not 15 comrades who were involved in the booing are not from KZN. I’m profiling them now. Either they are from Mpumalanga or from Free State, I am going to be communicating that to the public tomorrow,” Ntuli told SowetanLIVE's sister publication TimesLIVE.

According to Ntuli, they were taken aback by their booing as well as media questions about their presence and support for Zuma at his trial.

This request, he said, was accepted based on their argument that the case against Zuma was suspicious as it was taking long,

The NEC and the officials agreed with the ANC KZN PEC that Zuma must be supported when he appears in court, which they have done every time, Ntuli said.

He explained that this was the reason Zuma stood in their defence and called out those who booed them.

“That’s why JZ stood up and said no you can’t, you can’t boo our leadership when you are here. You can’t say you are coming to support me and yet you are going to tell me who must come and must not come, you can’t,” Ntuli said.

According to Ntuli, the booing bolstered their belief that there was an attempt to destabilise the province by people who want to make it seem like KZN was divided.

'The came in somebody's carrier bags'

These people, Ntuli said, are facing their own legal battles and wanted to push a narrative that the ANC in KZN was behind them.

They did this, he said, by bringing people into KZN in “carrier bags”.

“There’s an agenda to destabilise the province and this agenda is driven by interests that are complementing each other in the destabilisation of the province but they are not sharing the common political perspective,” Ntuli said.

“Let me give you one example, you have comrades who are bused from somewhere outside KwaZulu-Natal to come and boo the KZN leadership. How do you explain that except that there are people who are not from our province who came here, who themselves are facing their challenges, including with the law, and they want to project KZN as part of their support base to advance their own cause?

“Because if you come here [and] you are not from KZN what else could be the motive? Is that they came in somebody’s carrier bags, dropped into KZN and once they are in our soil they must then boo us in our soil to create an impression that the leadership of the province is losing the support of its own members in the province. Who’s interest is being addressed by that?”

He said it was their belief as ANC KZN leaders that people who were only now showing support for Zuma were doing so to garner support in their own legal battles.

Ntuli took a swipe at the suspended ANC secretary-general Ace Magashule for saying that he will come with the entire Free State province when Zuma appears in court again on May 26.

He said Magashule’s statement was “irresponsible”, especially because of the imminent Covid-19 third wave.

He said that he will also publicly challenge Magashule on the undertaking he made because “as much as we are supporting JZ, as much as some of us are facing our own internal challenges and difficulties in the movement and conflicts with the law, but we never cease in providing leadership which is what the ANC expects of us”.

Ntuli said he was aware that there would be people who were going to advise Magashule that KZN had turned its back on him for challenging his comments.

This, he said, would not matter as “we are not a leadership that is working for approval of anybody, that is why when we decided to support JZ we went and engaged the national leadership”, Ntuli said.

“Even now if the SG and whoever advises him come to a conclusion that if we say what he says is wrong is because we have turned our backs on him, he has a choice to believe that — we don’t need his approval.

“We are leading a province, we have got a responsibility to that and we are not going to be measured on the basis of who we support,” Ntuli said.

Ntuli told TimesLIVE that when agreeing with their request to support Zuma, the NEC and the national officials said they must make sure that they put a stop to the platform of Zuma's court appearances being used to attack President Cyril Ramaphosa and the ANC in general.

“We will allow you to support JZ, to attend the court case because it is also becoming very clear that the court case of JZ is now degenerating into a platform that is intended not only to undermine the president of the ANC but the ANC as an organisation,” Ntuli explained.

While suspended SG Ace Magashule vowed to "die in the ANC" outside the Pietermaritzburg high court on Monday, Jacob Zuma reminded supporters that ...
News
1 year ago

The National Prosecuting Authority says it has done all the necessary preparations and 217 witnesses are ready to testify.
News
1 year ago
Next Article