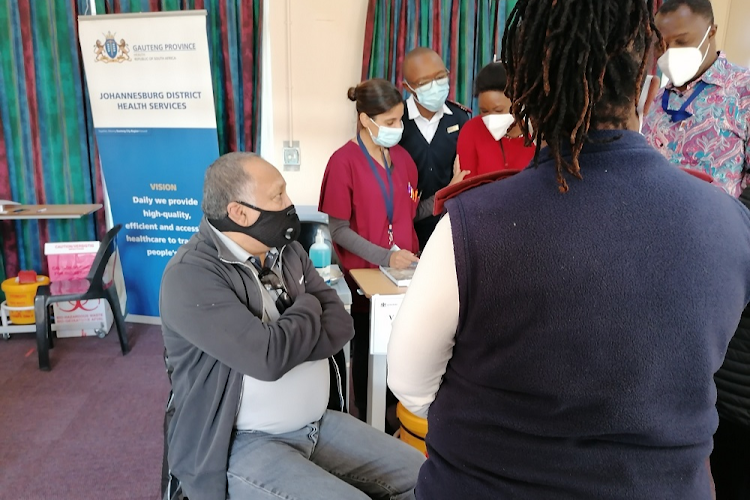 Tommy Harris waits to get his jab as nurses and staff at Discoverers Community Health Centre struggle to capture his details on the system.
Image: Nomahlubi Sonjica/TimesLIVE

Vaccination for Covid-19 was off to a slow start at the Discoverers Community Health Centre in Roodepoort, west of Johannesburg, on Monday, as nurses and staff struggled to capture details of those who were to be inoculated.

By midmorning, there were seven elderly people waiting in a queue to get inoculated, but nurses at vaccination stations were still struggling to register those who had not received an SMS confirming their registration.

Before they could go to the vaccination stations, residents had to first go to the registration desk, to get verified for vaccination. However, the first three people who arrived at the centre had not received confirmation messages, despite them claiming they had successfully registered online.

Mogeru Morewane, chief director for the Johannesburg health district, said it was understandable that on the first day of vaccination, things would move at a slow pace.

“It is the first day and it is a little bit cold this morning. Maybe they are still coming,” said Morewane, speaking before anyone had arrived.

Health minister Zweli Mkhize has warned South Africans that receiving the Covid-19 vaccine did not guarantee complete immunity from the coronavirus.
News
8 months ago

“We are waiting for those who have been scheduled to be vaccinated. We want the elderly who have registered,” she said.

“We will still register those who have not registered.”

Babita Deokaran, chief director of finance, said they would not turn away people who had not registered for inoculation.

“If we get patients who are 60 years or older and are on chronic medication, we will register and vaccinate them.”

When TimesLIVE arrived at the centre, staff who were to register patients were given electronic tablets to capture their details.

The vaccination room has six stations, each manned by one nurse.

Deokaran said after being vaccinated, the patient would be taken to the observation area, next to the vaccination room.

“One nurse can vaccinate up to 40 patients in a day. Once a patient has been vaccinated, they will be observed for 15 minutes. Those who experience allergies or difficulties are taken to the emergency room where they will be attended to by a doctor.”

An ambulance would also be stationed outside for any case of emergency, she added.

The Gauteng health department is hoping to vaccinate more than 1.3 million people over the age of 60 during the second phase of the national Covid-19 vaccination plan.

We aren’t sure how long Covid-19 vaccine lasts in the body: Zweli Mkhize

There are unanswered questions about the Covid-19 vaccines being administered worldwide as countries battle through the deadly pandemic.
News
8 months ago