Five killed outside Hoedspruit as car veers off road into tree

By naledi shange AND Naledi Shange 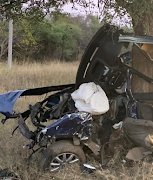 Image: Supplied Five people are dead after the vehicle they were traveling in hit a tree in Hoedspruit.

Five people died when the vehicle they were travelling in crashed into a tree outside Hoedspruit in the Mopani district in the early hours of Sunday, the Limpopo department of transport said.

“The driver of a VW Sedan lost control of the vehicle, veered off the road, and hit a tree. Four people were certified dead on the scene and one person was rushed to Tintswalo Hospital but succumbed to their injuries on arrival,” said department spokesperson Matome Moremi Taueatsoala.

Preliminary investigations have revealed that reckless driving may have been the cause of the accident.

Pictures from the accident scene showed the mangled remains of the vehicle with a popped airbag.

Limpopo transport and community safety MEC Mavhungu Lerule-Ramakhanya conveyed his condolences to the families of the victims.

He called on motorists to adhere to traffic rules.