As Covid-19 numbers rise, officials try to stem panic of a third wave 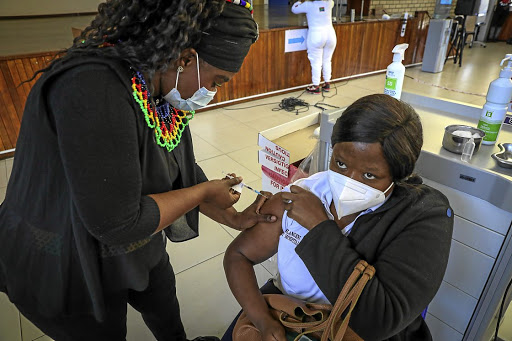 Health worker Thulisile Luthuli is vaccinated at Chris Hani Baragwanath Hospital in Johannesburg. The government has promised to release a list of vaccine sites on Sunday.
Image: Sebabatso Mosamo

Healthcare workers and officials are downplaying the looming threat of a third wave of Covid-19 infections despite steadily rising case numbers in most of SA’s provinces.

The health department said last week that while the upward trend in cases across SA was “worrying”, the country was not yet in a third wave of the pandemic.

“The Free State, Gauteng, Northern Cape and North West are of particular concern, but every province, with the notable exception of the Eastern Cape, has at least one district of concern,” the department said.

Confirmed cases have continued a steady uptick over the past week except for the Western Cape which saw a decline from 1,954 active cases on May 6 to 1,723 on Thursday.

Gauteng reported the biggest jump in cases, rising from 4,103 last week to 6,712 this week.

As rising infection numbers continue to spark fears of a third Covid wave, sectors that operate on the basis of gatherings feel there has been ...
News
1 year ago

“From weeks of having no cases at all, we are now seeing cases that require hospital admission, even if it’s just for oxygen,” he said.

Essa hoped that thanks to the ongoing vaccine rollout and some level of herd immunity in the population, the third wave would not hit as hard.

“But if there are cases of the new variant, that may affect how our third wave spreads.”

CSIR senior researcher Ridhwaan Suliman said the data and the trends were moving in the wrong direction.

“These are clear warning signs that infection rates are increasing.”

SA’s test positivity rate — a good indicator of how cases are rising or falling — is now just over 7%, he said.

The rate was below 5% at the beginning of March.

By the end of April, however, the rate had risen just over 5%.

Concerns about sustained increases of coronavirus cases across 7 provinces.
News
1 year ago

North West, the Free State and Northern Cape had been a particular concern since Easter with all three provinces reporting very high positivity rates.

The Northern Cape’s positivity rate was over 20%, while the Free State's was 15% and North West's just over 10%, he said.

Gauteng’s rapidly rising cases were driving the national figures as it is the most densely populated province, he added.

Suliman said the definition of what constituted a third wave came down to semantics.

“There’s no scientific definition of what a third wave is and there's no globally accepted standard,” he said.

He noted that the department had accepted a certain threshold — based on the number of confirmed cases exceeding 30% of the previous wave’s peak — at which it could quantify whether the country was in a third wave.

“If you use that definition, we're not in a third wave yet but we’re essentially moving in that direction,” he said.

The Free State and Northern Cape were reporting caseloads of 60% and 90% respectively of what they saw during the peak of the second wave.

Gauteng’s infections stood at 12% of the previous wave’s peak this week.

Suliman said SA’s third wave was not an inevitability.

“We can't just sit back  and say ‘OK, it's just gonna happen',” he said. “Our individual and collective behaviour does influence the trajectory of these curves.”

SA had a wide range of tools that could be used at different stages to either prevent a resurgence or to control the outbreak. These included the proven non-pharmaceutical interventions as well as increased testing which should be used more proactively to monitor and increase surveillance of outbreaks.

Efficient contact tracing and tracking and isolation of infected people were vital to controlling outbreaks, he said.

“[What] we’ve learnt from the past year is that superspreader events are critical contributors to this pandemic,” he said.

In Tshwane, where active cases reached 1,260 this week, the city had implemented an outreach campaign in response to rising infections in the CBD, Laudium and Centurion.

This week the city announced it had identified 84 medical sites and 91 non-medical sites, such as community halls, as vaccination centres, said Sakkie du Plooy, the mayoral committee member responsible for health.

Officials feared that vaccinating many people from the two main hospitals would pose a health risk. “We can’t continue the [vaccination rollout] with only two hospitals,” said Du Plooy.

Officials are also concerned that having crowds of people waiting to be vaccinated at clinics would be a health risk as people mingled in queues.

“There are 360,000 people over the age of 60 in Tshwane alone,” Du Plooy said, adding that Tshwane was ready to begin vaccinating its residents immediately.

“The third wave is here,” he said.