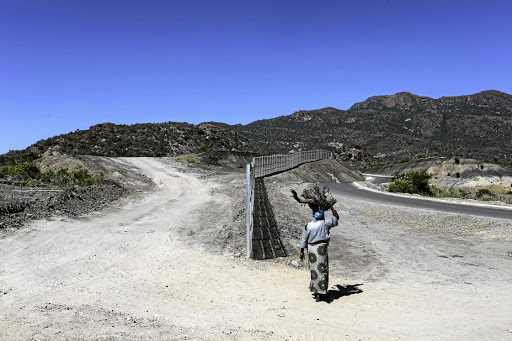 A fence is erected on a farm near Burgersfort in Limpopo by Zijin Mining Group, a Chinese-owned company that opened the Garatau Platinum Mine on Thursday.
Image: Alaister Russell

A controversial platinum mine in Limpopo was officially launched on Thursday, despite ongoing questions over the involvement of its BEE partner and a pending court case.

The Garatau Platinum Mine Project was launched on Thursday in Garatouw, Limpopo. It is owned by the Zijin Mining Group, a leading Chinese gold company, through SA-focused platinum developer Nkwe Platinum Limited.

Operations to begin the construction of the box-cut, which will make way for the decline shaft development, is due to begin at the end of May. Once fully operational, the mine will be among the top 10 platinum suppliers in the world.

But despite the official launch on Thursday, the mine remains marred by controversy.

Central to the drama is the fact that minerals and energy minister Gwede Mantashe gave Nkwe Platinum the go-ahead to mine without its long-time empowerment partner, Genorah Resources.

There is an ongoing court dispute between Nkwe and Genorah over who holds the mining rights. Nkwe has now begun to mine Garatouw farms, near Burgersfort in Limpopo, without Genorah, which also holds the right to mine there.

The department has now claimed that it had committed an error by issuing the letter to Nkwe. 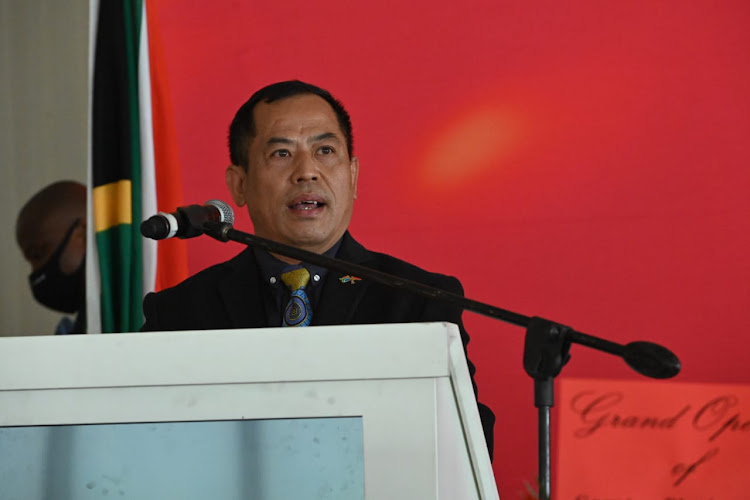 Nkwe Platinum CEO Zhiyu Gary Fan at the launch of the mine on Thursday.
Image: Supplied

“The department has since amended the authorisation and informed the affected parties ... This authorisation was granted to allow for proper consultation to unfold between the companies, other stakeholders and the communities directly affected.

“It is the department's considered view that any further delays to a commencement of mining activities would not only delay or negatively affect mineral development, but also socio-economic growth and employment opportunities.”

The fight between Genorah and Nkwe began after Nkwe merged with a subsidiary of its majority owner, Chinese-listed Zijin. It formed a new company, also called Nkwe, which is registered in Bermuda.

The new company is claiming its predecessor’s mining rights, despite the transfer of these not being approved by Mantashe — as required by SA law.

Genorah and the old Nkwe owned 26% and 74% respectively of the Garatouw mining right, which was awarded in 2014.

The department was made aware that the new Nkwe allegedly hadn’t applied for the transfer of the rights from the old Nkwe, by the old company’s Australian minority shareholders, who made follow-up inquiries through their lawyers, Werksmans Attorneys.

The department's regional manager in Limpopo, Azwihangwisi Mulaudzi, had since 2019 met with both Genorah and the new Nkwe.

The Limpopo province is known for its lush forests, national parks, fruit farms and heritage sites - but lately its green image has come under threat ...
News
1 year ago

The new Nkwe has told DMR and the Pretoria high court that it did not need these approvals because under Bermudan law, amalgamation did not mean the cessation of the old company’s rights.

“An amalgamation does not result in the creation of an entirely new entity or in either amalgamating company ceasing to exist. Nkwe continues to exist together with BidCo as an amalgamated company which has adopted the name Nkwe Platinum Limited ... In other words, Nkwe and BidCo (as two separate entities before the amalgamation) now exist as one amalgamated company,” said Nkwe in its March 2020 presentation to the DMRE.

The Sunday Times reported last month that Mantashe was dragged into the court battle after his wife’s business partner, Vuyani Gaga, was said to be claiming to be his nephew in an attempt to bolster his claim to a 26% BEE stake in the lucrative mining project.

Mantashe denied any relation to Gaga, who was paid more than R1.1m by Nkwe last year. Nkwe has not explained these payments to Gaga or what its relationship is with him.

About his letter of permission authorising Nkwe to start mining, Mantashe said many officials are involved in any letter he signs.

“You will find letters with my signature all over the place. When I sign, the matter has been through a long process, from the region to various layers within the department.”

On top of that, the more than 180 villagers who live and farmed off the mineral rich Garatouw land, claim to have been tricked into selling their land for a mere R40,000.

According to the documents they signed, the money was a one-off payment that will give Nkwe Platinum the right to mine chrome ore, cobalt, copper, nickel ore, gold and other minerals on the land, potentially earning billions.

Local activist group, Maandagshoek Community Against Land Invasion, claim the situation was not properly explained to those who had signed away their land.

Among Nkwe's consultants are Gupta-linked former department of public enterprises director-general Richard Seleke; former lawyer Bally Chuene, who was struck off the roll of advocates; and Vuyani Gaga, who allegedly told the community he was Gwede Mantashe's nephew.

Frank Maponya Frank MaponyaAngry residents of Maandagshoek near Burgersfort in Limpopo are accusing mining companies in their area of pumping ...
News
14 years ago

Seleke told SowetanLIVE sister publication Sunday Times the company followed the law to the letter and that there was no wrongdoing. Chuene referred queries to Nkwe.

On Thursday, Chupa Mathabatha, the Limpopo premier, in his welcoming speech, said the government had the obligation to ensure the mineral resources were used in a manner that promoted local and rural development and the social upliftment of communities affected by mining.

“We are here to celebrate a project that will create much-needed jobs for our people. This project is envisaged to create no less than 6,000 jobs for the local communities. We really need to work together as government and the private sector, towards a clear aim of creating black industrialists,” he said.

The annual average processing capacity of Garatau is expected to yield 3.6 million tonnes of ore once full capacity is achieved in several years’ time. At today’s platinum prices, it is expected to generate about $41m worth of tax in revenue for the local government annually.

The life of mine is estimated to be in excess of 29 years.

MD and CEO of Nkwe, Zhiyu Fan, said parent company Zijin would invest some $700m into the construction of the mine.

A group of community activists in Marikana in  North West are calling for mines operating in the area to provide jobs and skills development for the ...
News
1 year ago

Training must be central to mining industry's development goals