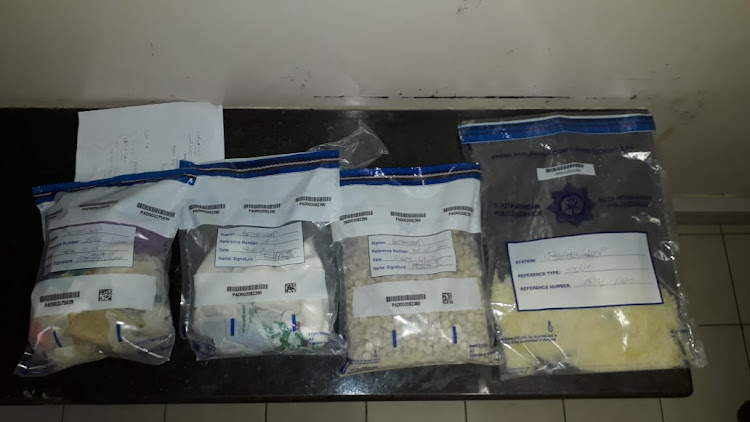 Western Cape police believe they have made a large dent in the illicit drug trade, after three major busts in two days.
Image: Saps

Western Cape police believe they have made a large dent in the illicit drug trade, after three major busts in two days.

On May 4, Narcotics Organised Crime detectives with the Namaqualand K-9 unit intercepted large quantities heroin, crystal meth (tik) and cocaine valued at R5,4m in the West Coast town of Vredendal.

Police said in a statement the consignment was destined for Cape Town. Two men and a woman aged 32, 33 and 39 appeared in court on charges of dealing and possession of drugs.

On May 5, police from the National Intervention Unit armed with intelligence pounced on two storage facilities in Westlake and Noordhoek in Cape Town where they seized 30,000 Mandrax tablets and 0.435kg of tik.

Four Bulgarians and six Myanmar nationals filled the dock in the Vredenburg magistrate's court on Thursday after they were arrested this week in ...
News
1 year ago

A 33-year-old suspect who was arrested has since appeared in court in Wynberg, police spokesperson Brig Novela Potelwa said.

The street value of the drugs is estimated at R2.1m.

Meanwhile, Lockdown II forces deployed in Cape Town to deal with serious violent crimes later that same day swooped on a home in Windsor, Kraaifontein, where they discovered a dagga cultivating lab and an assortment of cannabis products.

The value of the confiscated drugs is R5.4m. Cash to the value of R56,000 and rounds of ammunition were also seized with two suspects arrested in the house that is also used as a karate dojo. Potelwa said.

Acting police provincial commissioner Maj-Gen Thembisile Patekile has lauded the efforts of all members involved in the execution of the successful operations. “The illicit drug trade is one of our focus areas as we strive to create safer Western Cape communities. Our operational plans are targeting both the runners as well as major dealers.”