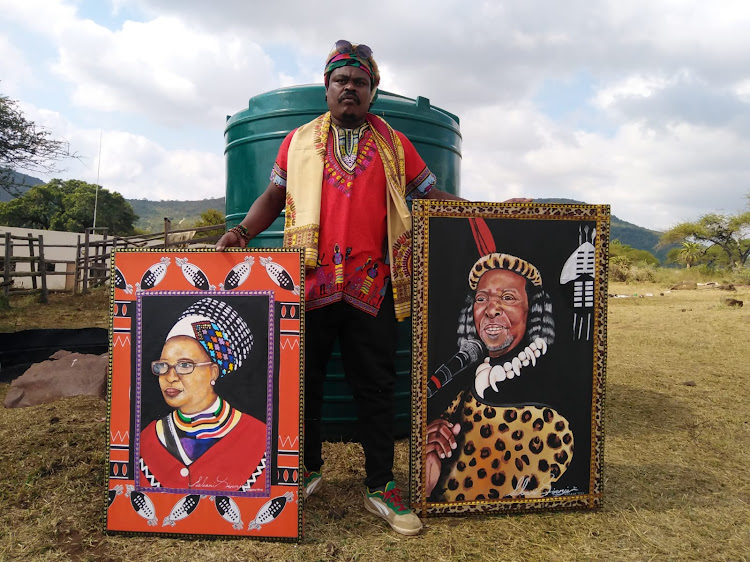 Funeral artist Lebani 'Rasta' Sirenje was present outside the royal palace to display his artworks of the late Zulu queen and king.
Image: Mlu Mdletshe

The queen passed on last week after a short stay at Milpark Hospital in Johannesburg. She was 65 years old.

She was laid to rest at the crack of dawn on Thursday in a private burial.

Massive portraits of the late queen, adorned in white flowers, greeted mourners at the memorial.

Outside the palace funeral artist Lebani “Rasta” Sirenje was present to display his artworks.

Rasta told TimesLIVE he had travelled from Johannesburg to be a part of the historic event.

“I came to pay my respects to the queen. As I always honour the legends with paintings, I thought it is befitting to have one of the king.”

Rasta said he would donate one of the portraits to the royal family as a gift.

“As artists we are different in how we pay tribute to legends. I felt this will make people realise that art is instrumental in life.

“Every time I make a painting in honour of a fallen hero, I usually give one to the family and keep one for myself in case of an exhibition in future.”

Mourners have descended on the KwaKhangelamankengane royal palace to pay their respects to the late Zulu regent.
News
8 months ago

Prince Mangosuthu Buthelezi has urged the Zulu nation to give the royal family space to mourn and deal with succession issues at a later stage.
News
8 months ago

The remains of the Zulu regent arrived at her final resting place in KwaNongoma, northern KwaZulu-Natal, on Wednesday.
News
8 months ago
Next Article