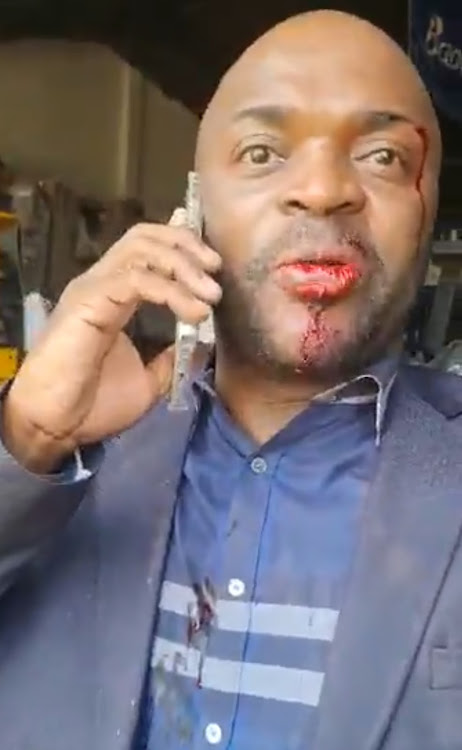 Following an altercation that left DA Gauteng leader Solly Msimanga with a bloodied face on Thursday, the politician and a man who beat him up claim to have smoked a peace pipe.

The assault incident was captured on video.

In a second video clip, which was sent to the media, the man apologises to the politician while in his company.

"There was an unfortunate misunderstanding this afternoon which resulted in a scuffle with Mr Msimanga and my apologies to him for being hurt in the scuffle. The issue is resolved and there is no moneys outstanding," said the man, who doesn't identify himself.

The apology comes after a video clip of a bleeding Msimanga engaged in an argument about an alleged R1.4m debt surfaced on social media yesterday afternoon.

In the earlier video clip, the man repeatedly warns Msimanga that he will beat him up while also accusing the politician of owing him the money.

The man also accuses Msimanga of having laid a hand on him.

The incident apparently took place on Thursday while Msimanga was paying his cousin a visit at his business premises in Benoni.

This is how the entire #SollyMsimanga fight [beat-up] started. The said gentleman came to demand his 1.4 million rands, now in the afternoon the two say they’ve smoked the peace pipe. Question was there really 1.4 million rands exchanged? How ? And what was it for. #sabcnews pic.twitter.com/bgPyGbFtot

Gauteng DA chair Fred Nel told Sowetan that the party had held a meeting earlier in the morning that Msimanga attended.

"After the meeting, Msimanga went to visit his cousin at his business premises," said Nel.

Nel condemned "the vicious attack" on Msimanga and praised the police for swiftly arresting the man.

[JUST-IN] DA Gauteng Leader @SollyMsimanga was beaten up. “This is what happens to liars and thieves” #sabcnews pic.twitter.com/aMMWWqafNd

The 2min:17sec video clip starts with the man who apparently assaulted Msimanga saying: "​... came in to beat you, you are a liar and a thief. And this is what happens to liars and thieves, Solly. And you are not going to turn this into a political stone for yourself in my direction. You are a thief. You owe me money and I want it.

Msimanga, with blood oozing from his mouth, responds: "I owe you money?"

The man responds: "You owe me money, you f**k*n thief. Where did you get the money paid into JD, corrupt mother f**k*r? I want my money. What, you think I'm dumb? Ungi jwayela kabi mfana, ngizo ku ny*s* mina [you are undermining me, boy; I will beat you up]. You can't push me and beat me around and think I won't hit you back. This is what you get."

Msimanga again asks, pointing at himself: "I beat you?"

"Where is the gun?" the man asks, while putting his hand on Msimanga.

Msimanga gestures to him: "I will teach you a lesson."

"You are the one who is learning," says the man. "You don't take money from me, Solly, you don't! Ngithule kakhulu ni ngi jwaela kabi [you are taking advantage of me because I don't speak much]. Solly, where is my money, R1.4m? The police are not owned by DA, they are for us citizens of this country."

"Oh now you want to bring politics?" asks Msimanga. "Oh so, ucabanga ukhuthi uzo ngishaya [you think you will assault me] and I won't hit you back? This is what you get mfana [boy]," says the man.

Msimanga responds once again: "So I beat you?

"That's fine, you know what you did," says Msimanga.​

Gauteng police spokesperson Brig Mathapelo Peters told Sowetan that there was no record that Msimanga had reported the incident to the police.

Nkele Molapo, who this week opened a case of sexual assault with the police, has been sacked by the party for allegedly leaking confidential ...
News
1 year ago

The Gauteng premier survived a motion of no confidence brought by the DA.
News
10 months ago
Next Article