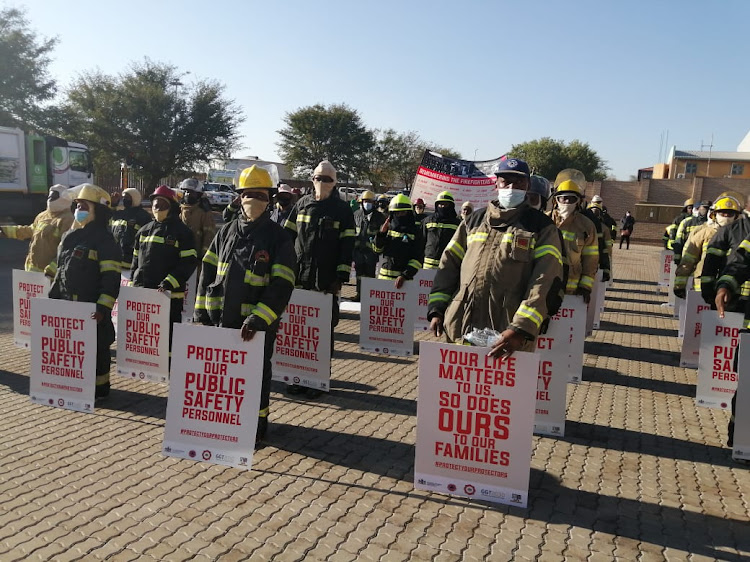 The day is observed to celebrate and honour firefighters globally for being heroes on a day-to-day basis.

The group at  Olifantsfontein also took the opportunity to highlight the problems they face while on duty, including attacks in some communities. They held placards pleading for protection.

Their plea comes on the back of recent reports of attacks on paramedics and firefighters across the country when they attend to calls.

The day was also used to pay tribute to the three firefighters  who lost their lives  while battling a fire that raged for two days at the Bank of Lisbon building in Johannesburg  in 2018.`

Co-operative governance and traditional affairs MEC Lebogang Maile said on this day the country and the world remembers and celebrates the bravery and selflessness of firefighters.

In recent weeks firefighters had to battle fierce fires at Charlotte Maxeke Hospitals in Johannesburg and at the University of Cape Town.

“We also commemorate the three heroes that died at the Bank of Lisbon building extinguishing a fire that resulted in them losing their lives, ” said Maile.

Maile said he also wanted to send out a strong message to criminals who attack firefighters and paramedics in their line of duty and prevent them  doing their jobs.

“We as government want to say that we will not tolerate the criminality against these heroes anymore. We urge all municipalities to  beef up security for all firefighters and paramedic personnel and to ensure their safety at all times.”

Maile said emergency services in the county attend to about 7,000 incidents every day, saving lives and rescuing patients and individuals.

Two air force helicopters are being used to help contain a fire raging above Simon's Town.
News
8 months ago

At least 18 people, including two healthcare workers were killed in a fire at a Covid-19 hospital in the western Indian state of Gujarat late on ...
News
8 months ago
Next Article