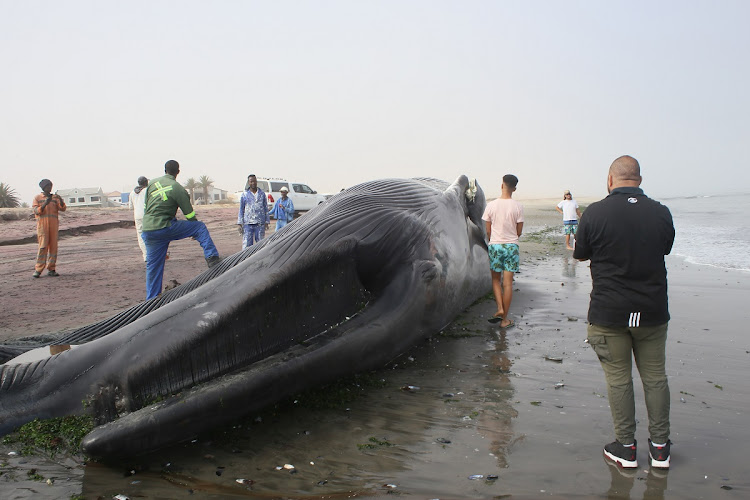 An Antarctic blue whale washed up dead on the shores of Walvis Bay, Namibia, on April 27. The animal was confirmed to be a female that was just over 18m in length and had several injuries consistent with a strike by a ship.
Image: Bridget James/Namibian Dolphin Project

An Antarctic blue whale has washed up in Walvis Bay, the first known stranding in Africa since the end of commercial whaling.

The whale appears to have died from injuries sustained when colliding with a large vessel. However, researchers say its presence in Namibian waters could attest to a growing population of the critically endangered species.

The stranding on Tuesday this week was confirmed by Cape Town-based scientists who conduct marine research in SA and Namibia.

The Antarctic subspecies of blue whales — the world’s largest animal — are known to visit the deep waters off the Cape and Namibia but are rarely sighted.

“This is the first ever recorded stranding of this species in Namibia, SA or probably Africa since the end of commercial whaling,” said the team from Sea Search and the Namibian Dolphin Project.

“The Antarctic subspecies of blue whales (Balaenoptera musculus intermedia) remains listed as critically endangered due to the fact that the current estimated population is still less than 1% of its original pre-whaling size,” Sea Search said this week.

“However, surveys coordinated by the International Whaling Commission have estimated the population to be increasing at around 7% per year.

“Blue whales are usually found offshore (well off the continental shelf), and their seasonal migrations and breeding and feeding grounds are generally poorly understood. There are only a handful of sightings (fewer than 10) of live blue whales around southern Africa to date, mostly off western SA and Namibia, despite extensive observer effort.”

Although the whales are seldom seen they are frequently heard by scientists conducting acoustic monitoring in deep waters. The recordings support the theory of an overall population recovery.

It looks like the ship hit the flank, then the animal was rolled and the fin was broken too. It likely died very quickly.

The stranded whale was 18.3m long (they can reach up to 30m) and had a broken flipper most likely caused by being struck by a ship.

“Ship strikes can injure or kill whales and dolphins and several have occurred in SA over the last few years, but this is the first clear evidence of it in Namibia on a large whale,” Sea Search said.

“The downside of recovering populations of large whales is that with increasing whale numbers comes increasing negative interactions with human impacts like fishing, entanglement and ships, not to mention the impacts of over fishing and habitat change.”

Simon Elwen, Namibian Dolphin Project director who is affiliated with Stellenbosch University, said: “We are as confident as we can be without a full necropsy that the cause of death was ‘ship strike’.

“It looks like the ship hit the flank, then the animal was rolled and the fin was broken too. It likely died very quickly.”

Nahoon Beach has been closed to beachgoers after a shark attack early Thursday.
News
1 year ago

The Kruger National Park has requested visitors to the reserve to switch off geotagging on their cellphones when taking pictures of wildlife during ...
News
1 year ago
Next Article