The person to be charged should have been farm caretaker, says magistrate 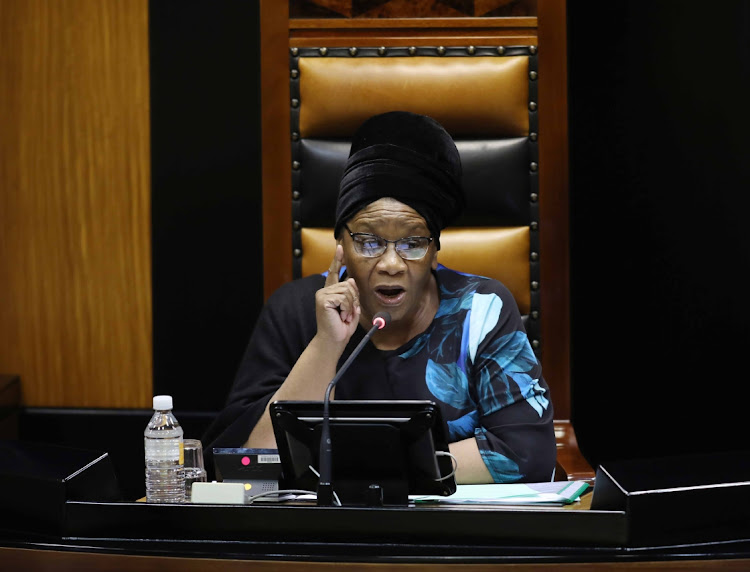 Madame Speaker Thandi Modise has been cleared off all charges on animal cruelty.
Image: ESA ALEXANDER

The animal cruelty case against National Assembly speaker Thandi Modise has been dismissed by the Potchefstroom regional court on Friday due to lack of evidence against her.

Modise has since last year been on trial through a private prosecution by AfriForum on behalf of the National Council of the Society for the Prevention of Cruelty to Animals (NSPCA).

The dismissal of Modise’s case comes as the ANC’s “step aside” rule reached its deadline on Friday, with leaders formally charged with corruption and other serious crimes expected to vacate their posts.

While Luthuli House had indicated that Modise’s case did not fall into the category of the so-called serious crimes, backers of embattled secretary general Ace Magashule, who is charged for corruption and money laundering, have been calling for her not to be spared as she was also charged.

In 2014, the NSPCA had lodged a criminal complaint accusing Modise of having left animals, including cattle, sheep, goats, pigs and chicken, to starve to death on her farm, leading to some animals cannibalising on others.

Following the refusal by the NPA to prosecute the case over what it said was lack of prima facie evidence to take it to court, AfriForum had successfully applied to take the case over and privately prosecuted Modise on behalf of the NSPCA.

Head of AfriForum’s private prosecution unit advocate Gerrie Nel had told the court that Modise had failed to care for the  animals, leaving them without adequate feed and water. This happened when she left her post as North West premier to take up her position as the chairperson of the National Council of Provinces (NCOP) after the 2014 general elections.

On Friday, magistrate Ben Mtebele said there was no sufficient evidence that Modise was responsible for the deaths of some of the animals on the farm.

Mtebele said evidence before the court had shown that there had been water and a caretaker who had been left on the farm to care for the animals.

“It is clear that water was made available and was there for the animals to drink. Secondly, Tebogo [Mokaedi, the caretaker] is the one who left the farm, entrusted the duties by Wendy (Modise’s secretary),” Mtebele said.

The animals had included 147 pigs, more than 59 sheep, more than 11 lambs, more than 54 goats, more than 25 chickens and geese, according to the charge sheet that was prepared for Modise by Afriforum.

Nel had told the court that the NSPCA was forced to euthanise more than 224 animals at the farm.

Modise’s lawyer, advocate Dali Mpofu, however accused the witnesses of the NSPCA who had lied and claimed that there was no water at the farm.

“The accused provided tanks. She bought Jojo tanks and so on and even Tebogo says there was water, so on what basis does the prosecution say there is prima facie evidence because there was no water?” Mpofu argued.

Mtebele said Mokaedi had been the one who had abandoned the animals and caused their dehydration and starvation.

“I agree with the defence that the person who was supposed to be charged is Tebogo… in short the accused person, there is no prima facie case against her,” he said.

The Potchefstroom regional court will on Wednesday receive an explanation from national assembly speaker Thandi Modise as to why she failed to appear ...
News
1 year ago
Next Article