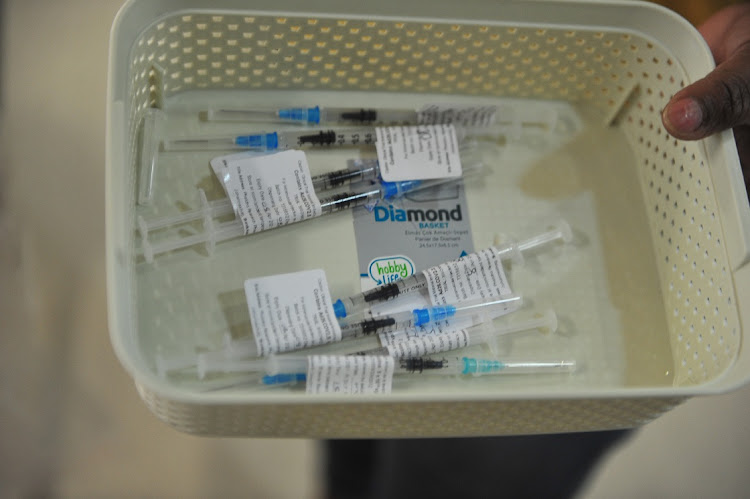 The Johnson & Johnson vaccine being administered to health workers at the Charlotte Maxeke Hospital in Johannesburg.
Image: Thulani Mbele

South Africans who claim from a Covid-19 vaccine injury fund will give up rights to approach the courts to sue the government or health workers should they suffer severe injury from taking the injection.

This is in terms of new regulations for the compensation fund in the event a person is severely injured by a Covid-19 vaccine.

Minister of co-operative governance and traditional affirs Nkosazana Dlamini-Zuma gazetted the regulations last week after allowing four days for comments, leading to an outcry by activists.

The government has secured millions of doses of vaccines from drug companies Johnson & Johnson (J&J) and Pfizer, who both insisted on a no-fault compensation scheme run by the government as a prerequisite for supplying the vaccines. The companies will not be liable for any costs should the vaccines cause injury or death, but instead the government will take on liability.

J&J specified that these regulations be set up by April 30. The regulations, which came into effect on Thursday, do not address many of the main issues surrounding the fund, such as how much money the fund will be allocated, and how much claimants will be awarded.

It is not clear in the regulations from which departments’ budget the government will source money. It reads the budget for the fund must be approved by a vote of parliament and allocated to the department. It suggests donations would also be allowed.

Claims can also be lodged in the case of a direct, severe injury or death from vaccination against the scheme, which cannot be shut down until all claims are finalised.

The fund will not cover common and mild side effects from vaccines such as pain at the site of injection, headaches or nausea or a fever.

The claim form needs to be in simple language so claimants understand they waive rights to go to court once they claim from the scheme.

The regulations require four panels to be appointed by the minister of health. The causality panel, which will include medical experts, will determine if a claim is valid and if there is causal link between the vaccine and the patient’s injury.

An appeal panel will be set up should a claimant dispute any decision or the financial amount awarded.   The person in charge of the appeal panel should be a retired judge appointed by the health minister.

The minister will appoint the remaining members of the appeal panel after consulting the judge. The director-general of the department of health is still required to appoint an administrator for the fund who has the necessary expertise and capacity to perform the functions efficiently, effectively, competently and fairly.

Funds must be ring-fenced and only spent on injury compensation and the costs associated with administering the scheme.

The government aims to vaccinate more than 42 million people by the end of March 2022. Phase one targets healthcare workers, some of whom have already been vaccinated under the Sisonke implementation study.

Phase two, which is due to start on May 17, will include people over the age of 60, essential workers, people living and working in crowded settings, and adults with underlying health conditions that put them at increased risk of severe illness. ​

Reuters reports that a research study in SA further evaluating Johnson & Johnson’s Covid-19 vaccine in the field will resume on Wednesday.
News
1 year ago

We can take precautions now to keep third wave at bay, but we must prepare for a possible rise in infections

Based on the spread of the Covid-19 pandemic in other countries, an SA expert predicts SA’s third wave could be 25% more severe than the second wave, ...
News
1 year ago

SA will receive one million Johnson & Johnson vaccines from the plant in Gqeberha by Monday, acting minister in the presidency Khumbudzo Ntshavheni ...
News
1 year ago
Next Article