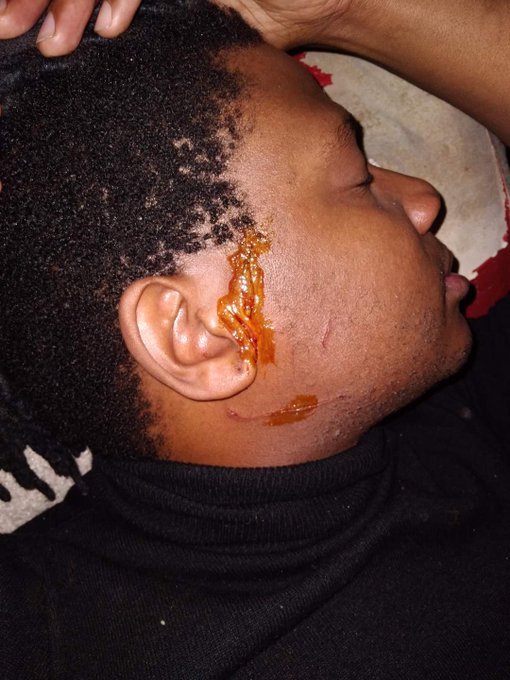 Segakweng Kimora Magoma was allegedly attacked by six men at a bar in Sasolburg because of his sexuality.
Image: Supplied

A 32-year-old gay man from Sasolburg in the Free State said he is hurt and disappointed that there are people in SA who hate and attack others for their sexuality.

On Sunday evening, Segakweng Kimora Magoma was allegedly attacked by a group of homophobic men at a bar in Sasolburg.

Magoma said he is happy to be alive and said if it was not for the intervention of the bouncer at the bar, he could have easily been another hate crime statistic.

Recovering from his injuries, he told TimesLIVE he was with a friend when an unknown man approached him and called him a Sesotho derogatory term for a gay man. In response, he said he told the man to call his mother.

The man started attacking him.

“Within a few minutes, about five or six men already there were stabbing me with bottles. Fortunately, a bouncer saw what was happening and immediately came to my rescue,” Magoma said.

He has cut wounds on his ear and scratches on his face. He also had a deep cut wound on his hand.

“They were all aiming for my face. I kept it covered with my hands at all times and that’s why they ended up stabbing my hand,” he said.

Traumatised and hurt, Magoma said he would not hide his sexuality nor change who he is simply because some  people can’t accept it.

He said it was worrying that people would attack a stranger for his sexual preference.

“I don’t know those people. I have never seen them and find it puzzling why they think they can attack me like that. What were they hoping to achieve? Were they thinking they can change my sexuality like that?”

Magoma said he is yet to open a criminal case with the police as he is waiting to feel better first.

DA councillor in Ethekwini, Sakhile Mngadi, a friend of Magoma’s, said as the country commemorates Freedom Day, South Africans should ask themselves ”where is the freedom of the LGBTQI+ community?” while they live in fear of being raped and murdered for simply existing.

A group of LGBTQI+ activists have scheduled a  march to the Union Buildings in Pretoria on Tuesday in honour of Andile “Lulu” Ntuthela who was murdered in the Eastern Cape. His family last saw him on March 31.

LGBTQIA+ people in SA ‘are under siege’

Simphiwe Mkhize, says he often found himself in fights with fellow pupils who were insulting him and calling him names because he is gay.
News
1 year ago

“We are taking the voices of the LGBTQI+ community to the Union Buildings to demand that government speaks up and takes tangible action surrounding the escalating issue of hate crimes against queer bodies in SA,” said the organisers.

“We call on the greater society to recognise the vulnerability of queer bodies in SA and #standwithus as we call for justice for the lives lost and an end to the war on queer bodies in this nation.”

There has been a recent spate of violent attacks against members of the LGBTQI+ community and at least six known murders in the last few months, according to the civic alliance grouping Civicus.

“SA has been lauded as a champion for LGBTQI+ rights on the continent because of its progressive legal framework that recognises same-sex marriage and full equality for everybody. However, in reality the situation of LGBTQI+ rights has been deteriorating, with LGBTQI+ rights campaigners and individuals living and operating in a hostile environment characterised by hate speech, death threats and killings,” it said.

Among its recommendations, Civicus called on government to fast-track the implementation of the Hate Speech and Hate Crimes Bill and invest in gender sensitisation workshops for rural communities to foster harmony and understanding of the LGBTQI+ community.