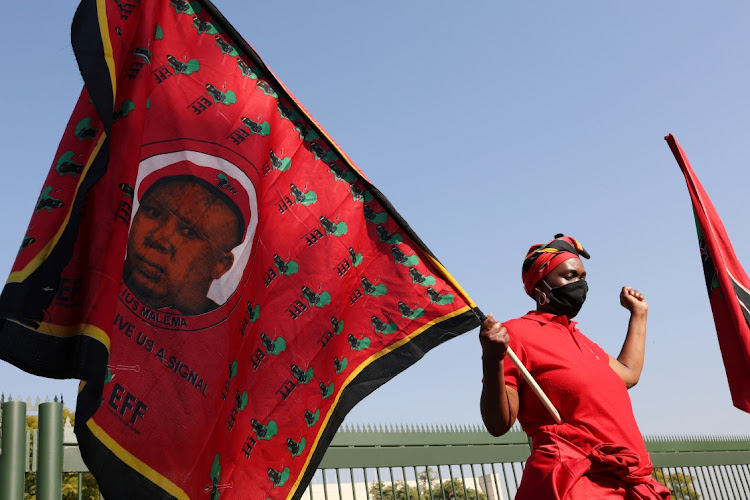 EFF leader Julius Malema used his Freedom Day speech to pay tribute to South Africans who died after contracting Covid-19 and accused the ANC government of abandoning citizens when they needed it the most.

The EFF held its Freedom Day rally in the Saulsville Arena in Atteridgeville, Tshwane, where the party’s leader put the spotlight on the failures of the governing ANC.

Malema said Freedom Day was not a day of celebration but a day when South Africans, who he referred to as Covid-19 “survivors”, came together to acknowledge each other.

“We survived not because we have a good government. This government abandoned us at a point where we needed them the most, when our people needed personal protective equipment (PPE) and food parcels. Food parcels that arrived were not given to a lot of our people.

The EFF leader accused those in government of stealing the little the country’s coffers had and eating with their families while most South Africans live in poverty.

Malema questioned the freedom SA celebrated on Tuesday, asking: “What type of freedom is this without water, toilets, shelter, without access to quality education, access to clinics and hospitals, roads, with the highest unemployment among the youth, poverty and hunger among the so-called liberated.”

‘Vote them out if they are abusing resources’: Cyril Ramaphosa on local elections

"Exercising our right to vote is by far the most powerful form of protest. If those who claim to serve you are not doing so, vote them out, because ...
News
1 year ago

The EFF leader also took the opportunity to chastise South Africans who continue to vote for the ANC of being “without a conscience”.

He said the older generation were selling out the rest of the country by continuing to vote for the ANC and are giving thieves an opportunity to steal jobs from their children.

“Your children are being killed asking for free education. They are not asking for nyaope [drug]. They ask to be admitted for education without money, but they are shot at with rubber bullets yet you continue to vote for the people who kill your children.

“When you go out to vote, leaving your unemployed children, voting for the same organisation that is responsible for your children’s employment, where is your conscience? This government has not even given you health care but you still vote for them,” he said.

“What freedom is this without land? We didn’t fight to be liked by white people. We are not on a honeymoon with white people. We don’t owe white people any explanation, including why we want the land. They owe us an apology and an explanation as to why they oppressed and killed our people,” he said.

Malema said black South Africans continued to speak like beggars in their own land and called for a demand for economic freedom.

He threatened the ANC with withholding the EFF’s votes with the ANC in parliament over land issues.

He also advocated for the use in SA of China’s Sinovac and the Russian Sputnik vaccines against Covid-19.

“Let people have a choice. We want to save lives. We want all vaccines to be available,” he said.

He called on South Africans to use their votes to take back the governance of SA.

“We have no leadership, we need to remove them from power.”