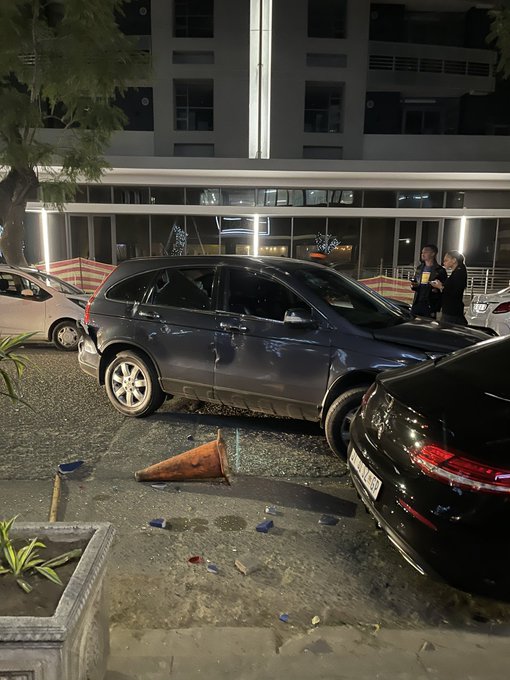 A 33-year-old man who went on the rampage on Friday night at News Café in Rosebank will appear in court this morning.
Image: Twitter: @ItsLithaAfter9

A 33-year-old Johannesburg man who wanted to crash his vehicle into News Café in Rosebank on Friday will appear in court on Monday.

According to the Rosebank Management District, the man allegedly tried to drive his car into the restaurant after being denied entry by the bouncers. He reportedly arrived there to see his ex-girlfriend who did not want to see him.

The Management District is aware of the unfortunate incident that took place at Newscafe last night and our reaction officers were available to assist despite one of our vehicles being damaged in the process. The matters is now in the hands of law enforcement #Rosebank pic.twitter.com/eXbGrIyZjg

A man allegedly tried to drive his car into the NewsCafe after being denied entry by the bouncers. He reportedly arrived there to see his ex-girlfriend who did not want to see him. The car damaged a number of parked cars on Cradock and Tyrwhitt Ave #Rosebank

Masondo said the man was charged with reckless and negligent driving and driving while under the influence of alcohol.

News Café tweeted on Friday: “This evening, News Café Rosebank was the scene of an unfortunate event. A non-customer randomly walked into our store and proceeded to insult, antagonise and intimidate our patrons.

“Security immediately removed the individual who later returned, in a fit of rage, and attempted to drive his vehicle into the store, damaging property such as vehicles, furniture and the building facade. He has subsequently been arrested by the Rosebank police and thankfully no-one was injured.

“Thank you to our quick-thinking team who immobilised the threat. Also everyone who helped, from the security to the police and our new neighbours Proud Mary.”

On Friday, some patrons at the restaurant took to social media to share the experience.

On Twitter, @ItsLithaAfter9 shared that she was happy to be alive after almost being driven over by the man.

Second attempt he tried to drive into the side of the restaurant where the smoking section is and was literally blocked by the cars parked in the street. If it wasn’t for the cars he probably would’ve been successful in driving in💔💔

Another user on Twitter, @BossMatriach, detailed how patrons tried to run for safety.

Not this guys tryna drive into News Cafe Rosebank to get his girlfriend (or ex)... Just because she refused to come out and talk to him. She is a waitress there. Nigga attempted to drive INTO the establishment.. Abantu baqhashe balahleka all over the show.

Someone at Rosebank Mall just drove their call into the News Cafe clearly trying to injure someone. One of the scariest moments of my life having to be pulled away to avoid being knocked by this guy 😓 hope everyone is okay and safe.