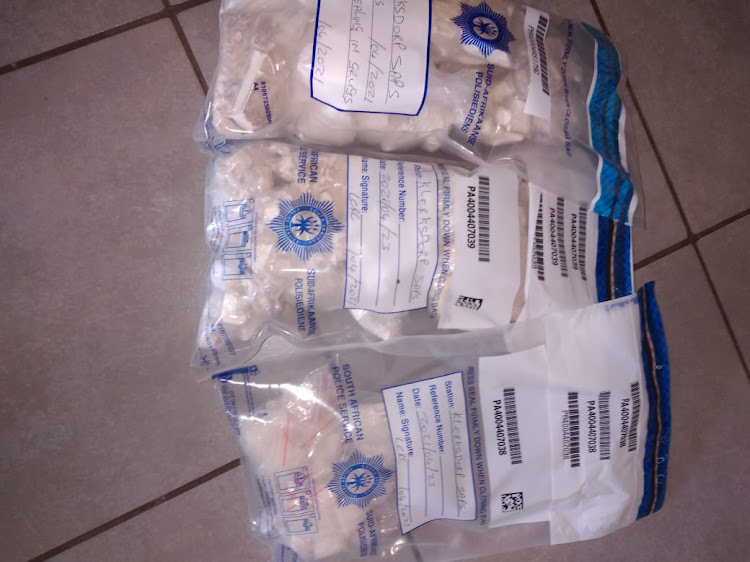 Hawks officers slapped the 33-year-old foreign national with an additional charge of corruption after he offered the officer a R10,000 bribe.
Image: Aron Hyman

An alleged Klerksdorp drug dealer thought the offer of a R10,000 bribe to Hawks officials could change his and his partner’s fate.

But, the Hawks officials who arrested the 33-year-old foreign national and his 26-year-old associate after they discovered R1.5m in crystal meth and 'cat' (methcathinone) in a flat instead slapped the suspect with an additional corruption charge.

The duo was arrested by the Hawks’ Serious Organised Crime Investigation team during an intelligence driven operation in Klerksdorp on Friday.

“It is reported that the team executed a disruptive operation on Charl de Klerk Street wherein upon searching a flat at Bushwillows two suspects, a female, 26, and a male foreign national, 33, were arrested,” said Hawks spokesperson Col Katlego Mogale.

“A further search of their residence revealed a plastic bag with two blocks of what was suspected to be 'cat' and smaller bags containing meth with an estimated street value of R1.5m,” she said.

“The entire village will kill itself.” These were the chilling, desperate words of Emalahleni municipality mayor Ntombizanele Koni.
News
9 months ago

She said that during the arrest, the 33-year-old asked to speak to one of the members and offered the officer R10,000 in an attempt to dissuade him from opening a docket. The officer declined and added a charge of corruption to that of possession of illegal drugs.

“Both suspects will be appearing in the Klerksdorp magistrate's court on Monday, on charges of dealing in drugs, possession of drugs and the second suspect will be additionally charged for corruption,” said Mogale.

She said the provincial head of the Directorate for Priority Crime Investigation (Hawks) in the North West, Maj-Gen Mbotho applauded the team and especially the officer who displayed “absolute integrity”.

“It is quite refreshing to see members displaying such integrity and behaviour that is beyond reproach when suspects attempt to buy their honour,” Mbotho said.