Eastern Cape has some of the worst-performing municipalities, says premier 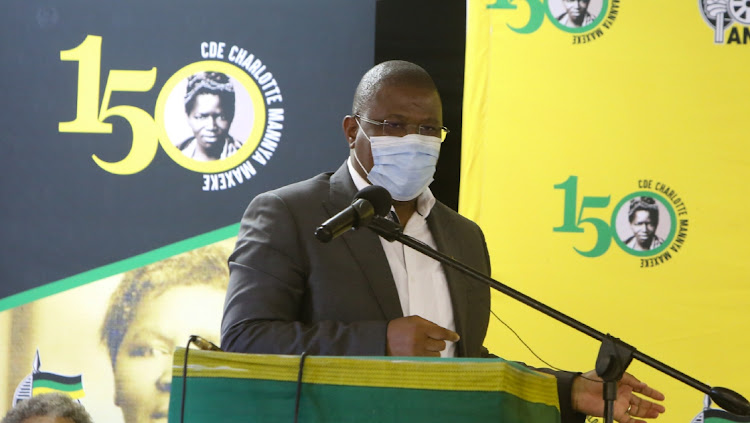 Eastern Cape ANC chair Oscar Mabuyane had some harsh words to say about the performance of councillors in the province during a political lecture.
Image: WERNER HILLS

Where the ANC governs in the Eastern Cape it has mostly failed to deliver services, with its councillors instead creating chaos and anarchy in municipalities.

This has led to businesses withholding rates in protest.

Mabuyane blasted party members for the state of municipalities in the province, saying a lack of consequence management was hampering service delivery.

“That 54th national conference was a Damascus moment,” he said.

“We can’t continue enjoying this selfishness that we see.

“We fight about everything but how to take our people forward.

“Our meetings are stuck on organisational dynamics, factionalism, we’re at each other’s [throats] and praise factionalism to the detriment of the ANC.”

The most important of the wins for the ANC is in Knysna, in the Western Cape.
News
1 year ago

The ANC will not support any postponement of the elections, unless recommended by the Electoral Commission and supported by scientific rationale, ...
News
1 year ago

Mabuyane said ANC members politicised governance environments too much, creating an environment for patronage, with a tendency of not respecting governance.

“When we’re preparing for conferences we tend to create chaos in municipalities.

“That has to stop. It cannot continue. It’s not right.

“We cannot create anarchy and chaos,” he said.

Mabuyane said until municipalities delivered efficient services where the party governed, voters would vote the party out like they did in Nelson Mandela Bay in 2016 and it would lose control of some councils.

Speaking on ramping up the ANC’s campaign efforts heading to the October 27 municipal elections, Mabuyane said the party needed to win back the Kouga municipality, won by the DA in the 2016 elections, as well as Nelson Mandela Bay.

“The 2016 results led to an awakening that the votes of our people are not guaranteed.

“We’re a province with the most poorly performing municipalities as some are unable to spend their budgets.

“We’re not governing in Kouga and Nelson Mandela [Bay], and we had a 10% reduction in votes obtained in the Buffalo City municipality.

“We’re sitting on a time bomb in the Sarah Baartman district municipality as we’re leading by a [small] margin there,” he said.

Going forward, Mabuyane said the ANC should be frank when on the campaign trail and acknowledge where it had failed.

He warned that local elections often brought out the worst in members of the ANC, bringing about gangster-like tendencies.

His comment follows the arrest of councillor Lucky Mbuzi and others in connection with the killing of a rival at the Winnie Madikizela-Mandela municipality in Mbizana.

Mbuzi was arrested for allegedly having orchestrated the fatal shooting of Mduduzi Madikizela, who was his rival for a council spot.

Mabuyane said factionalism also cost the ANC votes because its members were more obsessed with and loyal to people whom they supported over the party.

“You can track instability in certain municipalities by the turnover of mayors in a term.

“The effects of this are astronomical.

“As we speak, the Madikizela household in Ntshamathe village is fatherless and the worst of this is that a fellow councillor and member of the ANC [is accused] of hiring thugs and killing a fellow comrade.

“We’ve heard of instances of hit lists being developed in the province and this is anti-ANC,” Mabuyane said.

He also bemoaned what he said was a tendency of some leaders to think they were bigger than the ANC, in some instances trying to unilaterally expand on NEC decisions.

This was a veiled swipe at embattled ANC secretary-general Ace Magashule who tried to include members not criminally charged by the National Prosecuting Authority in the list of people who should step aside by the end of April.