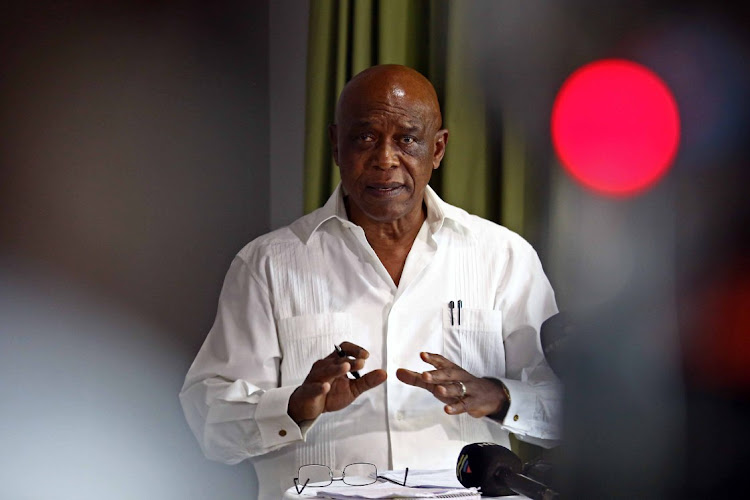 The press briefing that was to lay bare the intricate details around the existence of the controversial White Spiritual Boy (WSB) Heritage Fund turned into a satirical show that left more questions than answers.

Tokyo Sexwale was the lone conspiracy theory crusader standing in front of TV cameras and microphones at the Roboville Hotel in Midrand.

He was mostly animated as he sought to give credence to the claims he made during a televised interview that there was money stolen by known people, including politicians, through commercial banks.

One thing that most journalists left knowing about Sexwale is that the businessman hates being blue-ticked on WhatsApp, especially by the president. His monologue moved from addressing how he speaks English very well (thanks to his former teacher, Mrs Jacobs) to name dropping Nelson Mandela.

Sexwale had made headlines earlier this week when he claimed that a wealthy family from Malaysia had made available a fund (WSB) that would supposedly be used for philanthropic purposes  in Africa and other countries, including providing free education. The Asian family, he claimed, had appointed him and another SA man, Goodwin Webb, as mandate holders of the fund whose money would be held by the SA Reserve Bank (SARB).

The SARB confirmed that it had  received correspondence from Sexwale but it that no record of the existence of the fund. The bank said it could only conclude that the alleged fund was a scam.

Yesterday’s press briefing was therefore a chance for Sexwale to take ownership and to prove his elaborate claims, but it wasn’t to be.

Sexwale arrived at the hotel carrying a brief case and  went straight to greet one of the two males among the journalists in the room. He  shared a joke with the man who later turned to be none other than Fanie Fondse and asked him if he lived nearby.

Later, after Sexwale's more than two-hours address, Fondse would present himself as a shareholder at the SARB who has been investigating the “looting” of the fund.

"I’ve seen the fund’s account. It does exist,” Fondse said. At this point Sexwale asked Fondse about his interest in the matter as though they had never met before.

Soon after he had arrived for the briefing he was expected to address with Webb, whose name has only been mentioned surreptitiously  and named in correspondence, Sexwale announced the enigma had taken ill.

But for most of the show, Sexwale entertained journalists with tales about the legitimacy of the fund, his lack of interest in running for the presidency and handling “billions” in global institutions as a businessman.

“Managing billions of dollars is not something new to me... I’ve served my country. I've done jail time. My time to occupy the Union Buildings, a building built in 1910, is over. I m 68 years old, same age as Cyril [Ramaphosa] and by the time he is done in the office I’d be in my 70s. I don’t want that,” he said, shaking his head.

Sexwale said he was appointed to represent WSB in January 2019 and had e-mailed ANC treasurer Paul Mashatile, finance minister Tito Mboweni and Reserve Bank governor Lesetja Kganyago informing them about the fund. He showed slides of the e-mails with acknowledgment from Ramaphosa’s office, nothing substantive to prove his claims.

“After some time it was clear I was not going to me meet with the president, my fellow comrade.  I realised that my WhatsApps had two ticks, no reply... I was left high and dry,” said Sexwale sheepishly.

When asked how much was in the fund when he joined and how much was looted and by whom, Sexwale said: “I can’t tell you that information. Just trace the account yourself because I gave you the numbers.”

ANC veteran and businessman Tokyo Sexwale briefed the media after he made claims about billions of rand being stolen from a 'heritage fund'.
News
2 weeks ago

'Mr Tokyo Sexwale’s statement about stolen money is untrue, sad and [it] seems that he was a victim of the many scams around,' says finance minister ...
News
3 weeks ago
Next Article