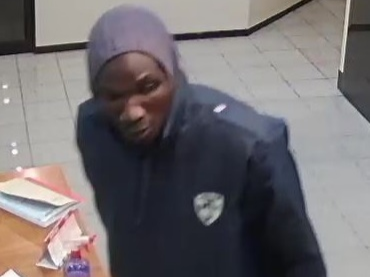 This man is wanted in connection with the recent burglary at the state capture inquiry offices.
Image: SAPS

Gauteng police on Friday offered a cash reward for information about the burglary at the state capture inquiry’s Johannesburg offices.

Robbers entered the offices in the early hours on April 18, taking one computer and two monitors.

“The investigating team has gathered evidence which indicates that at least three suspects were involved in the robbery.

It also emerged during the preliminary investigation that the suspects were armed at the time of the business robbery, she said.

“The positive identification of these suspects is key to the investigation, hence the cash reward on offer to any individual who can give information that will lead to the arrest and successful prosecution of the suspects.”

Anyone who is able to identify the suspects is urged not to confront them as they could be armed and dangerous, but to rather contact the investigating officer Lt-Col Mathothe on 079-694-6404.

Security beefed up after Zondo laptops are stolen

Offices of the state capture commission of inquiry in Johannesburg were broken into with laptops stolen during a burglary at the weekend, forcing the ...
News
1 year ago
Next Article