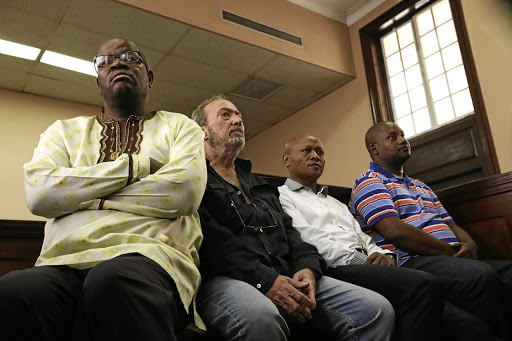 France Hlakudi, left, here during a previous appearance in the Pretoria regional court, where he asked the court to drop fraud charges against him related to tax evasion valued at R30m.
Image: Alaister Russell

The Pretoria regional court has ruled that the Investigative Directorate (ID) can proceed with its fraud probe against former Eskom executive, France Hlakudi.

Hlakudi’s legal team had brought an application for the striking off of the fraud charges before his tax evasion matter proceeds to trial.

ID spokesperson Sindisiwe Seboka said the ruling by magistrate Adriaan Bekker on Thursday allows the ID, working with Sars, to proceed with the matter of alleged fraud and tax evasion of R30m against the former Eskom senior manager for capital contracts. The case returns to court on May 24.

The charges relate to his personal tax affairs and that of his companies, Hlakudi Translation and Interpretation cc, Coxinel Chicken (Pty) Ltd, and Bon Services Telcom cc. This is for funds received between 2015 and 2018. The ID argued that Hlakudi intentionally defrauded the SA Revenue Service by failing to disclose his true income, which amounts to an intent to defraud the state.