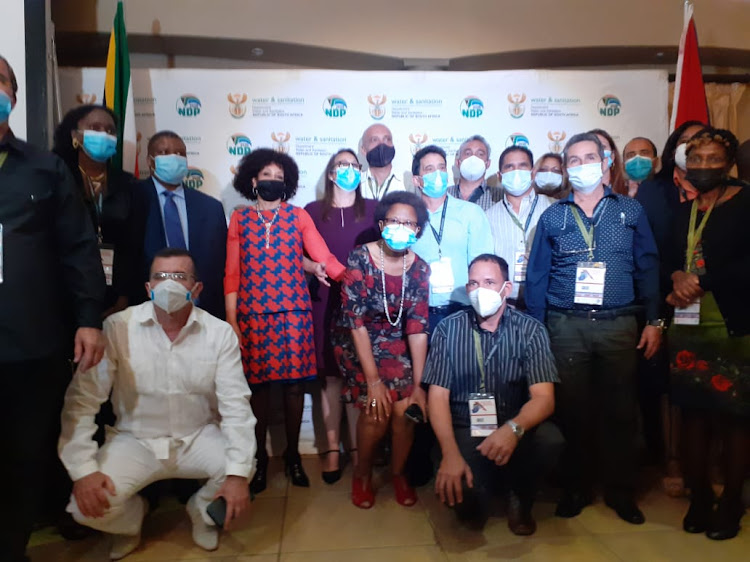 Minister Lindiwe Sisulu says the Cuban engineers deployed in SA will work in the rural areas, "where there has not been water, where nobody has come forward to say 'we can help you here'."
Image: Shonisani Tshikalange/TimesLIVE

They were not in SA to take jobs but to share experience and impart technical skills to SA water engineers, she told a briefing to welcome the team in Pretoria on Thursday.

“Very few of our own engineers would possibly opt to go work in the rural areas because they have families, they have preferences of where to work.

Sisulu said the engineers will be deployed in provinces like Mpumalanga, Northern Cape, Free State and North West.

The cost of the project is R64,652,000, inclusive of allowances, accommodation, and goods and services, according to a department document seen by TimesLIVE.

The government's decision to rope in engineers from Cuba instead of contracting local skills has drawn criticism from the profession and opposition political parties.

Consulting Engineers SA CEO Chris Campbell said existing SA engineering skills in the private sector are underutilised and there is a large pool of unemployed graduates.

Campbell also believes the 24 Cuban engineers are too few to make a dent in the capacity challenges at provincial and national levels in the department of water & sanitation. He said the solution was to address this through meaningful public-private partnerships.

“SA has countless unemployed engineers who are sitting at home right now, without the dignity that comes from work. They studied at SA universities, which are financed by SA taxes, and they speak SA languages. Our engineers are sought-after all over the world because of their experience and the quality of our engineering qualifications in SA universities.

“The policy of spending hundreds of millions of rand to benefit the Cuban government is a policy of the ANC arising from their historical relationships. Under the policy, the ANC is diverting money intended for services to our own people towards Cuban doctors and engineers so that they can come to SA and take work opportunities that should be taken by South African doctors and engineers.”

DA MP Leon Basson said the party would submit parliamentary questions to Sisulu to ascertain how much money her department was paying the Cuban engineers and their government.

“Over the past 20 years, the South African government has been employing Cuban teachers, doctors and engineers. However, there seems to be very little, if any, empirical evidence that the Cubans have made a significant contribution that local doctors, teachers or engineers could not have. While international aid and assistance should always be welcomed, the truth is that Cuba’s 'aid' to SA always comes with a massive price tag,” he said.

AfriForum, which produces annual blue and green drop reports analysing the country's water and sanitation problems, said it had repeatedly tried to discuss these with the minister — and had skills to offer the department.

“We have a list of retired engineers and specialists, as well as some who are still employed, who will be more than willing to assist the department in solving these problems,” said Lambert de Klerk, AfriForum’s manager for environmental affairs. “It is unacceptable to appoint Cuban engineers when SA has its own capable and qualified engineers.”

Sisulu's remarks at the briefing indicated that the current budget may be an issue.

“The Cubans are here for a short period of time to exchange their skills. There are South Africans who can do the same work but South Africans need to be employed, so they will be employed when we open up all of the projects that are there,” said Sisulu.

The eight Cuban doctors deployed to the Dr Elizabeth Mamisa Chabula-Nxiweni Field Hospital and who spent the first few months of the pandemic working ...
News
3 months ago

Ramaphosa praises Cuban medics more than our own, says IFP

The IFP on Monday criticised President Cyril Ramaphosa for his praise of the Cuban medics who were in the country, saying this overshadowed the ...
News
4 months ago
Next Article