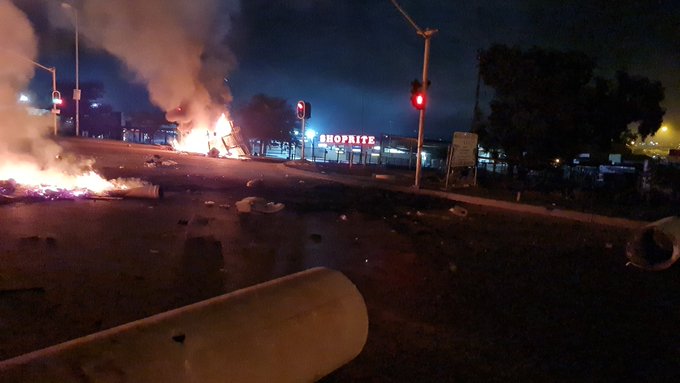 Illegal occupants of RDP houses and land in Olievenhoutbosch Ext 27, near Centurion, have barricaded roads with rocks and burning tyres in what they say is an attempt to stop the government from evicting them.

Godwin Ratikwane, general secretary of the Independent Democratic Union of SA and an EFF member, said the provincial human settlements department has been threatening to evict people from about 888 RDP houses.

He also said there were about 300 families who were being threatened by the City of Tshwane with eviction for the illegal occupation of land.

While the residents are said to have been living in the houses illegally, he said: “These people are the rightful owners of the RDP houses. The government was dragging its feet to allocate and the people chose to occupy them.”

Ratikwane said the people have been staying there for just over a year.

“The people moved in here just before the hard lockdown last year. Why should people suffer with accommodation when there is plenty of unused land here?” he said.

Ratikwane said the residents were tired of constant threats from provincial government and the municipality.

“They failed to provide us with a service and we came up with a solution ourselves so they must leave us alone,” he said.

He told TimesLIVE the residents will not allow themselves to be evicted.

“We will not be intimidated by police and the government. We’ve built our lives and homes here,” he said.

Community of Olievenhoutbosch has taken to the streets following the threats of ANC led Provincial Govenment regarding evictions and the DA led municipality. We demand that the government focus on issuing remaining people with service stands & leave us alone pic.twitter.com/GC3qta2g5X

Tshwane metro police spokesperson Isaac Mahamba said traffic in the area was heavily affected but their officers are on site monitoring the situation.

“All roads leading to Olievenhoutbosch are barricaded with objects and burning tyres. Affected roads include the R55, Thatchfield Road and the entrance by the Engen garage,” Mahamba said.

In September last year Sowetan reported the Gauteng department of human settlements had instructed the state attorney to obtain eviction orders to remove people who had allocated themselves government-subsidised houses and invaded unoccupied land.

Human settlements MEC Lebogang Maile told journalists at the time that illegal occupation of houses was a serious problem affecting the delivery of houses to those who qualify.

Sowetan reported that occupation of land and unallocated subsidised houses had been a problem for the provincial government and municipalities in Gauteng. Thousands of people allocated themselves places in a housing development in Fleurhof. The Red Ants clashed with residents who vowed they would not be removed from the properties as they had “been waiting for houses for years”.