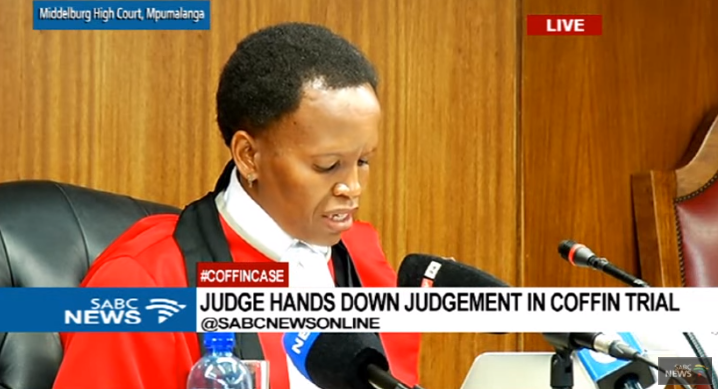 The judge who presided over the “coffin assault” case in Middelburg has been recommended for the position of deputy judge president of the Mpumalanga division of the high court.

Judge Segopotje Mphahlele was one of two judges — both female — vying for the position.

Her competitor was another seasoned judge, Anna Kgoele, who has held a judge's seat in the North West and Mpumalanga divisions and had a short stint acting at the Supreme Court of Appeal.

The Judicial Services Commission (JSC) received an opinion from one law firm against Kgoele's appointment. It said she had “arrogant disregard, lack of composure and understanding of the law, lacking requisite competence, experience and composure necessary for the position and should not be appointed DJP”.

Kgoele, in her defence, said she had an “excellent temperament and excellent interpersonal skills. As far as composure, I have excellent composure, even in court. My judgments can bear me out,” she said.

One of the commissioners touched on her failed interview for the North West deputy judge president position four years ago, at which Kgoele's conduct had come under scrutiny.

During that interview North West judge president Monica Leeuw had expressed her disapproval of Kgoele, saying she was moody, and they “simply did not get along”. Leeuw had subjected Kgoele to a cross-examination style of questioning‚ even causing chief justice Mogoeng Mogoeng‚ heading the interviews‚ to intervene.

Commenting on that, Kgoele said: “It was unfortunate that the interview proceeded in that manner but if you are aware, even during that interview my temperament spoke for me. In my view, I did not belittle my JP then,” she said.

It’s been four days since farmworkers Theo Jackson and Willem Oosthuizen, who filmed themselves forcing another man into a coffin, were released from ...
News
1 year ago

She said as a judge, she was firm, backing this up by saying “sometimes when you laugh, people can take that as a weakness” but she maintained she was approachable and that the complainant was disgruntled because she did not give them leave to appeal a matter.

It was Mphahlele’s managerial experience that appeared to make her shine above Kgoele.

Asked what made her a better candidate for the position, Mphahlele who had been praised by the Mpumalanga judge president Frans Legodi for her humble nature, listed her positive attributes.

She highlighted that she came from a background of managing a law firm, had led the Gauteng law council and formed part of the management of the law society of the northern provinces. She had also acted as judge president and deputy judge president in Mpumalanga.

Mphahlele provided an impressive record, revealing to the JSC that in all her years as a judge, only one judgment of hers had ever been overturned and this was the coffin assault case.

The evidence presented to the court had highlighted how farmworkers had kidnapped Victor Mlotshwa, assaulted and forced him into a coffin as they threatened to burn him alive inside. The farmworkers had recorded the assault on a phone and the video went viral.

While Mphahlele had found them guilty of attempted murder, the Supreme Court of Appeal later reduced the charge to one of assault with intent to cause grievous bodily harm.

It was this judgment that led to the Mpumalanga Law Society saying it had “no comment” over her potential appointment. Another lawyer had written a scathing comment, saying she had “ignorance of the law, had a lack of composure and understanding”.

“I analysed the evidence that was before [me] and I reached the conclusion that I did. I was set aside by the SCA on a competent verdict. I found that on attempted murder and they found a competent verdict on assault with intent to cause grievous bodily harm. I don’t know why they are taking issue with me. It doesn’t come out clear to me,” said Mphahlele.

The Mpumalanga Society of Advocates had also penned a letter, complaining of her temperament when it came to the treatment of counsel.

Mphahlele, however, held her own, saying when the Mpumalanga division started, she treated counsel with kid gloves but as they progressed, she had mentioned that there was a need to “cut the umbilical cord” and have counsel deliver.

“Their complaint was that I called them to order in court and not in private,” said Mphahlele, adding that with the number of cases she dealt with daily, there was never enough time to call counsel into chambers to address every grievance she had with them.

She said it was “unfortunate that they see it as an intention to embarrass them”, especially when she had clarified to them that this was not the case. “But I will reflect and where I lack, I will ensure that I improve,” she said.

She also provided an impressive record of what she had done towards the digitisation of the Mpumalanga courts, saying she and a colleague had compiled a code of conduct for conducting civil trials online and this was how many judges were operating during the lockdown.

Addressing justice minister Ronald Lamola, Mphahlele highlighted the challenges faced by residents of Mpumalanga with regard to access of the master of the high court. She claimed that at times, she had to send the people she dealt with to Pretoria.

She advised Lamola to employ people and have fully fledged offices in Mbombela and Middelburg, adding that the KwaNdebele office was not central.

She highlighted the low number of judges in the province, saying requests for more had not been granted.

On corrupt judges, Mphahlele said when such allegations surfaced they had troubled her but she was comforted when Mogoeng called on those with information to come forward and, so far, no judges have been implicated.

“I have not met an unethical judge,” said Mphahlele.

Justice minister Ronald Lamola yesterday announced that the two Mpumalanga farm workers who forced Victor Mlotshwa into a coffin would be referred ...
News
2 years ago

“It is shocking and there is nothing I can do. I am heartbroken and no longer interested in those guys.”
News
2 years ago
Next Article