R40m worth of PPEs damaged by blaze at Charlotte Maxeke Hospital 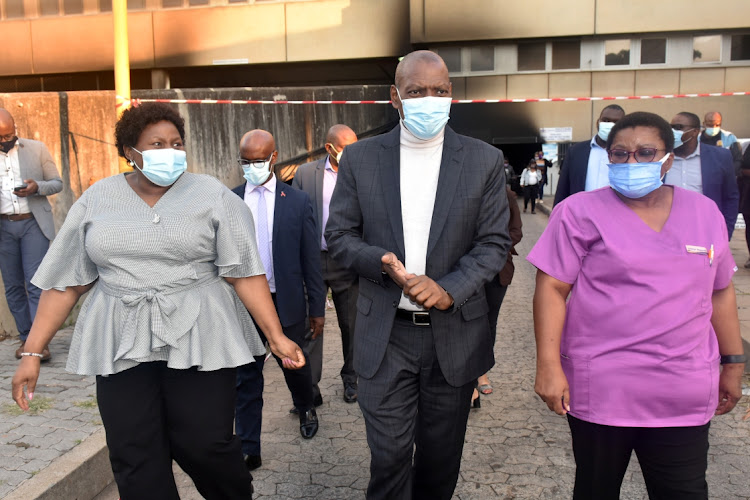 Health minister Zweli Mkhize during a visit to Charlotte Maxeke Johannesburg Academic Hospital after it was recently gutted by fire.
Image: Freddy Mavunda

More than R40m worth of personal protective equipment (PPE) stock was damaged by the fire that engulfed Charlotte Maxeke Johannesburg Academic Hospital on Friday.

This was announced by health minister Zweli Mkhize as he made his first visit to the hospital on Tuesday afternoon since the fire to make an assessment of the damage it caused. Mkhize was accompanied by the hospital CEO Gladys Bogoshi, Gauteng health MEC Nomathemba Mokgethi, provincial infrastructure development and property management MEC Tasneem Motara and members of the hospital medical team.

According to Gauteng premier David Makhura, fire broke out at the facility at 11.30am on Friday and then reignited again at night, forcing its closure for seven days to allow investigation and repair work to get under way.

“There has been a huge fire with a huge amount of destruction. No-one can actually tell the level of damage until a proper and thorough assessment has been done. But from the stock that was damaged, it is over R40m worth of stock, largely PPEs and other essentials,” said Mkhize.

Mkhize commended the hospital team for the speed in which it evacuated more than 840 patients in 24 hours, starting from last week Friday.

“My first sense of gratitude goes to the hospital team that cooperated and worked together in partnership to save as many patients as possible from injury and harm from the fire. They managed to evacuate over 840 patients within a period of 24 hours,” said Mkhize.

Mkhize said some of the patients who were evacuated include those who were on drips, bed ridden, ventilators and oxygen, just to mention a few.

The Gauteng department of health has assigned additional health workers at facilities which had to accommodate hundreds of patients evacuated from ...
News
1 year ago

The Gauteng department of health says it will take a while before the cost of damage caused by the fire that engulfed Charlotte Maxeke Johannesburg ...
News
1 year ago
Next Article