In the firing line of Cape Town’s notorious wildfires: Fearful dash to safety 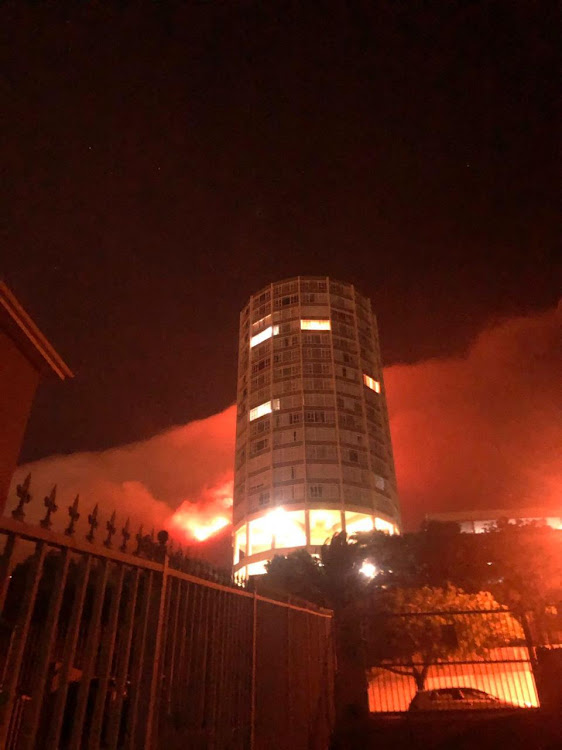 Disa Towers as the flames ripped through vegetation.
Image: Supplied

Shannon and Tara McAuliffe are getting used to running for their lives — and it’s a long run.

The last time a Table Mountain fire threatened their tall apartment tower at the top of Vredehoek they had to dash down several flights of stairs, anxious about their ailing father who was lagging behind.

Then on Monday morning the mountainside lit up again, and it was time to pack. Quickly. “These fires are not anything new, but it’s always just as scary,” Shannon told TimesLIVE  on Monday while waiting to hear if it was safe to return to their home in Disa Towers, a group of three apartment blocks on the edge of Table Mountain National Park.

“It was 3am and when I looked I could see how thick the smoke was. From my mom’s room I could see the fire creeping towards the tower where we live — it was moving so quickly,” she said.

Vredehoek is regularly — and literally — in the firing line of Cape Town’s notorious wildfires due to being nestled up against the mountain. It is also one of the city’s windiest suburbs and is particularly vulnerable to the howling southeaster which in this case drove a wall of flames straight into its bowels.

“The wind gets so bad that they had to wire one of my windows shut — it would shake and open,” said Shannon.

Fortunately the area is well served by the nearby fire station and the wider Cape Town firefighting community. To date it has mostly been smoke and embers, rather than the type of devastation seen during the Knysna fires. The sisters and their mother were able to evacuate their home safely along with their neighbours.

There was an unexpected bonus to this year’s fire scare. The family was graciously accommodated by the nearby Mount Nelson Hotel which agreed to let them wait out the fire in the comfort of the famous five-star hotel where they had coffee and croissants.

“A couple of years ago there was a fire by the Towers and a lot of people got to stay at the Mount Nelson until the morning — until they could go back home. My mom and her friends decided they would call the Mount Nelson to ask if we could wait there — they were quite willing.”

By late afternoon on Monday it was still unclear when the family would be allowed to return to Vredehoek.

Three days since the start of the devastating Rhodes Memorial blaze, City of Cape Town fire and rescue spokesperson Jermaine Carelse said the fire had been largely contained. Firefighting efforts were on Monday focused on Deer Park and the Disa Park towers in Vredehoek.

“Crews have worked tirelessly and the wind having died down considerably, has given them some respite," said City of Cape Town fire and rescue spokesperson Jermaine Carelse.

“Fresh crews and seasonal firefighters will be deployed to those hotspot areas at 9am today.”

Fires in Cape Town spread rapidly overnight on Sunday due to high winds in the area.
News
1 year ago
Next Article