Ringleaders of Cape Town refugee protests kicked out of SA 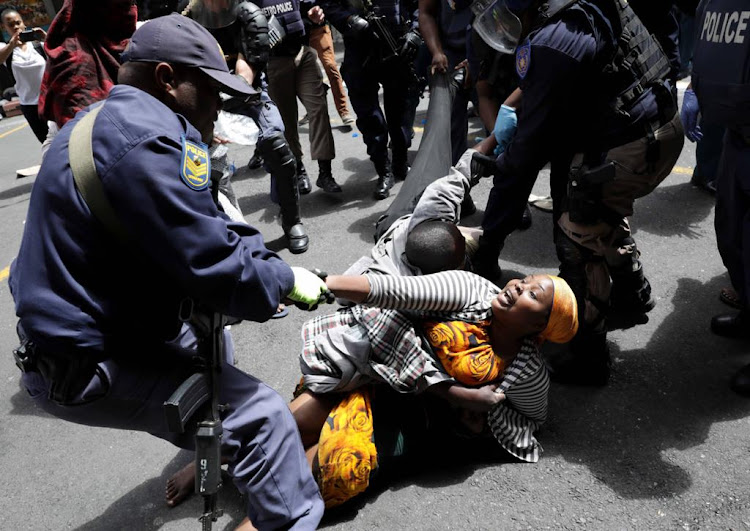 At the height of the protests, police and refugees clashed in the Cape Town city centre where the refugees had camped outside the UN High Commission for Refugees office before occupying the Central Methodist Church. File photo.
Image: Esa Alexander/Sunday Times

Home affairs minister Aaron Motsoaledi has confirmed a decision to deport 41 people who were part of a group of foreign nationals in Cape Town who wanted to be taken to Canada.

A further 121 foreigners had decided to take up an offer to be flown back to their home countries by the UN.

Motsoaledi revealed this at a press conference on Monday.

He said the ringleaders of the protest were among those deported because they did not qualify for refugee status in the country. Several others agreed to return to various communities in SA, with the UN paying for three months' rental and food.

The group of foreign nationals had decided to leave their communities, saying they feared xenophobic attacks, and demanded to be resettled in different countries. Their main preference was Canada and they occupied the Central Methodist church in Cape Town CBD in protest.

Another splinter group decided to leave the church and set up camp in Greenmarket Square, leading to a court battle with the city.

Parliament's portfolio committee on home affairs is not happy about living conditions at temporary shelters for refugees in Cape Town.
News
1 year ago

From the group, 583 who had applied for asylum-seeker status were rejected and they decided to appeal in terms of the law to the refugee appeals authority, said Motsoaledi. He said others were still in the appeals process.

“It means right from the beginning when people protested, there were people who did not qualify,” he said.

“Forty-one people were presented to the magistrate [in Cape Town] and they agreed with us that they be deported accordingly, hence they were detained in Lindela Repatriation Centre and the process of deportation started,” said Motsoaledi. He said among the 41 deported were the ringleaders who had fashioned themselves as fighting for a just cause.

“The fact [that] the courts agreed with us that these ringleaders must be deported, to us it shows that right from the beginning they were impostors who don't qualify for any international protection,” said Motsoaledi.

Among those deported was Ali Musa, from Somalia, who had been among "the faces of the protest" and who was quoted in different media speaking about their plight.

Another was Papy Sakumi who had brushes with law-enforcement personnel as he was arrested and later released on R2,000 bail. Sakumi was charged with robbery and assault.

They were both deported two weeks ago, according to Motsoaledi.

Another who will be deported is Jean-Pierre Balous who was also arrested and charged with assault but is still in jail.