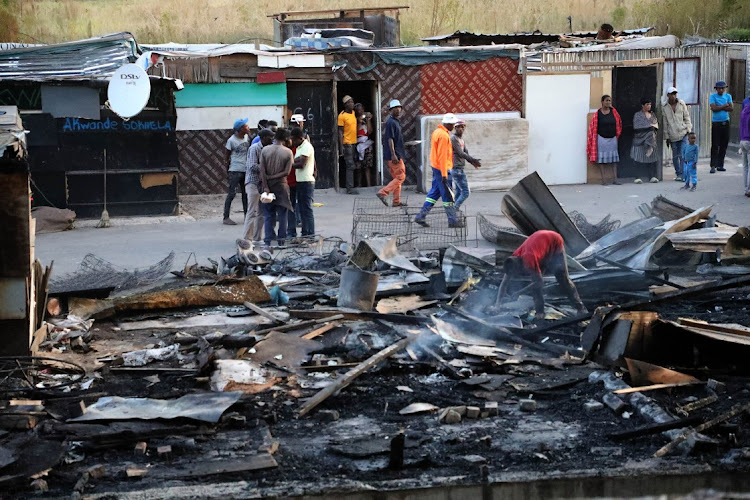 FILE IMAGE: One of the residents of Kaserne building helps himself to scrap metal from the rubble left by the fire. Other residents whose shacks were burnt were looking in hopelessly.
Image: ANTONIO MUCHAVE

The City of Johannesburg is planning to approach the high court to get an eviction order to remove all the people living in the Kaserne building which caught fire last week.

The Kaserne building, which was illegal occupied for more than a decade ago, was declared unsafe for occupation by city officials following the fire that left nine people dead last week.

Johannesburg mayor Geoffrey Makhuba announced that the building, which used to be public parking facility in the past, will be demolished and its occupants and those who live near it will be relocated elsewhere.

Spokesperson of the city’s housing department Neo Goba said plans are afoot to get all the residents relocated.

“The city will be heading to court this week to apply for an eviction order as there are a number of remaining people who do not want to move out of their shacks.  The intention is to evacuate all the shacks and relocate them elsewhere. There are, however, those that are reluctant to move despite the fact that they are not safe under those conditions, hence we intend evicting them,” Goba said.

Human rights lawyers explained that the property owner had erred in the reading of an earlier court order which simply stated that no additional ...
News
1 month ago

On April 14, nine people died, including an infant, when the building caught fire at about 3am. One of the nine succumbed to injuries after jumping from one of the floors to escape the fire. Another 11 were injured during the blaze.

According to the residents, this was the fifth fire to hit the building since 2016, when the first group of people started building shacks inside the property.

About 200 people were left homeless after the blaze. Tents have since been erected at a nearby soccer field to provide temporary shelter. Ablution facilities have also been installed and residents receive meals on a daily basis.

The Kaserne building is owned by the City of Johannesburg. It has shacks built from its basement to the fourth floor. There are also shacks surrounding the building and taxi drivers use the open spaces next to the building to park their vehicles.

The city identified the hazardous conditions the squatting in the building have created as far back as April 2007 after a raid by metro police.