Robber sentenced for accomplices' deaths in shoot-out with Durban homeowners 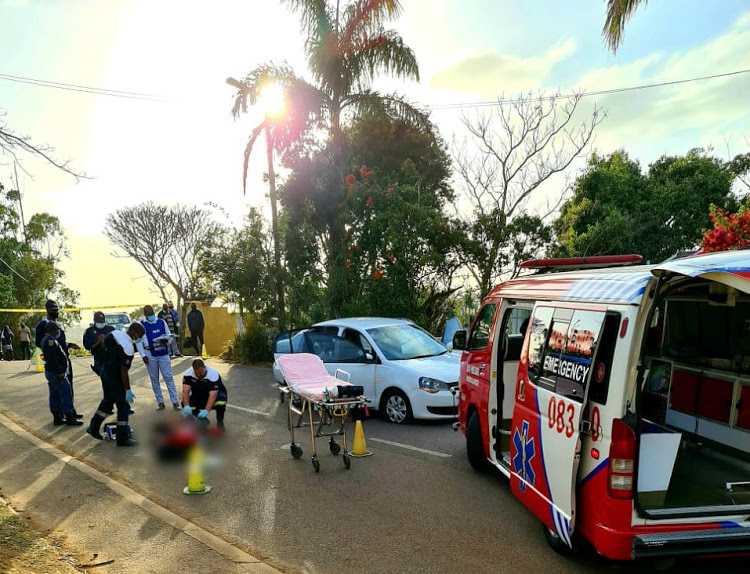 Although his accomplices may have been shot dead by the owner of the Westville home which he and his accomplices had burgled, Zamani Blose pleaded guilty to their murders in the Durban high court on Wednesday.
Image: Red Line Response

A 33-year-old e-hailing taxi driver was sentenced to 20 years behind bars for his role in a robbery that led to the death of two of his accomplices in a burglary in Westville in August last year.

Though his accomplices may have been shot dead by the owner of the home which they had burgled, Zamani Blose pleaded guilty to the murders in the Durban high court on Wednesday.

In his plea agreement, Blose said when he embarked on the robbery with his armed accomplices, Vuyo Hlanguza and Siyabonga Ndlovu, he foresaw that “people could be injured or killed, including those among themselves and continued regardless”.

Blose began working as an e-hailing taxi driver in August after many years of unemployment.

On August 5, his taxi was hired to transport four men to Northdene. During the journey, he discovered that they were planning to commit robbery as they had masks and gloves.

In his plea agreement, Blose claims that at first he didn’t want to participate in the crime but changed his mind when he was promised a share of the spoils. He received R800 for his part as the getaway car driver.

A few days later, the same group of men asked him to drive them to another “job” in Westville.

When they arrived at the house in Grace Avenue, he was given a knife and told to join the others in the armed robbery. They began searching the home but were interrupted by an elderly woman.

“Vuyo pushed her to the ground. While this happened, a younger Indian female appeared from a room and screamed. She quickly returned into her room and she locked herself in. Vuyo then rushed to her room and kicked the now-locked door open.

“We both entered the room and Vuyo slapped her and I grabbed the tablet from the stand in the room. The knife he was carrying was being brandished at this stage. Vuyo grabbed her around the waist and was pulling her out of the room.

“At this stage two Indian males appeared from downstairs and shouted at us. Vuyo let go of the girl and we both advanced at these males with weapons raised.”

The two men pulled out their own weapons and started to pursue Blose and Hlanguza, who were now fleeing.

As Blose approached the vehicle, he saw one of his accomplices, Mapitso raise a weapon and then heard shots fired. According to his plea agreement, Blose did not know who fired the shots.

He got into the vehicle with Hlanguza but was shot in the shoot-out. Blose jumped into the driver's seat to get away from the scene but was severely injured.

Mapitso fled the scene. Blose later discovered that Hlanguza and Ndlovu were shot dead at the scene.

Blose was treated by paramedics and thereafter arrested.

Blose, the father of two daughters aged seven and nine, told the court that he knew his actions were wrong and unlawful. He said his close brush with death made him want to change his life for the better and that he hoped to be rehabilitated.

In the plea agreement before court, senior state advocate Krishen Shah said the aggravating circumstances were that Blose had a previous theft conviction, the victims were attacked in the sanctity of their homes, most of the stolen property was not recovered and that some of what was recovered was covered in blood.

The victims' home was also damaged during the robbery.

Two girls, aged 13 and 15, were charged with the murder and carjacking of a Pakistani immigrant killed last week while delivering food in Washington ...
News
1 year ago

A Johannesburg police officer has been given two life sentences for the double-murder of his girlfriend and an Uber driver in May 2019.
News
1 year ago
Next Article