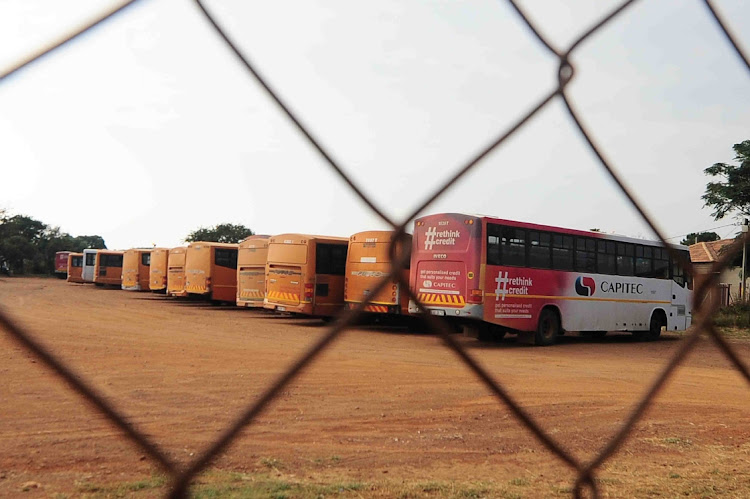 The bus service industry has had job losses of about 4,000 in the past year.
Image: Thulani Mbele

A potentially crippling strike in the bus sector was averted at the last hour when unions and bus companies agreed on a 4% salary increase.

In a compromise deal reached on Tuesday in the SA Road Passenger Bargaining Council (Sarpbac), unions chose to call off their looming strike and agreed to a deal despite having initially demanded 6%.

The negotiations had collapsed and abandoned last month as the bus companies were offering a 2.5% salary hike with the unions opting to exercise their rights to go on strike due to the deadlock.

Unions have described the deal as a huge compromise by workers but stated that they hope to save jobs at least.

SA Transport and Allied Workers Union (Satawu) passenger bus national coordinator Solomon Mahlangu said they were not happy with the deal but had to weigh their options carefully.

"We didn't have a choice because the current environment with the Covid-19 pandemic is not really conducive as other workers are being laid off while many are facing retrenchments," Mahlangu said.

He said they decided "to retreat and pull out from the strike" despite knowing that the 4% will not be making any improvement in the lives of the workers they represent. "To be honest, the workers have not won in this round of wage increase negotiations," Mahlangu said.

Thousands of employees at state-owned entities are facing a massive jobs bloodbath as several troubled parastatals are in the process of cutting jobs ...
News
1 year ago

National Union of Metalworkers of SA (Numsa) spokesperson Phakamile Hlubi-Majola said although the mandate from their members was to settle on the 4%, this will only be confirmed after their National Shop Stewards Council which will be taking place at the weekend.

Sarpbac general secretary Gary Wilson said employers and trade unions showed a commitment to get the industry back on its feet by agreeing to an inflationary wage increase.

“Until Covid-19, we had seldom had a wage increase under 8% and that placed parties under a lot of pressure,” Wilson said.

He commended the parties for remaining positive in the face of challenges brought on by the pandemic after the industry lost 4,000 employees in the past year due to retrenchments, closures and companies that stopped operating when the economy slowed down.

"Though (some of the companies that stopped operating) have not resolved to close down, they are yet to return to operation as they are waiting for the economy to recover," Wilson said.

The industry has seen Greyhound and Citiliner bus services closing down while Autopax, which owns Translux and City to City, is embarking on retrenchments due to financial problems for which the pandemic has been blamed.

Lockdown | One year on

Saturday marks exactly a year since President Cyril Ramaphosa effected the Covid-19-enforced national lockdown; and since then a trail of economic ...
News
1 year ago

The National Union of Mineworkers SA has welcomed the decision taken by bus company Putco to halt the retrenchment of more than 200 employees.
News
1 year ago

Commuters in Gauteng could finally this year use a single public transport card across different modes, according to premier David Makhura.
News
1 year ago
Next Article