J&J vaccinations and blood clots - what you need to know 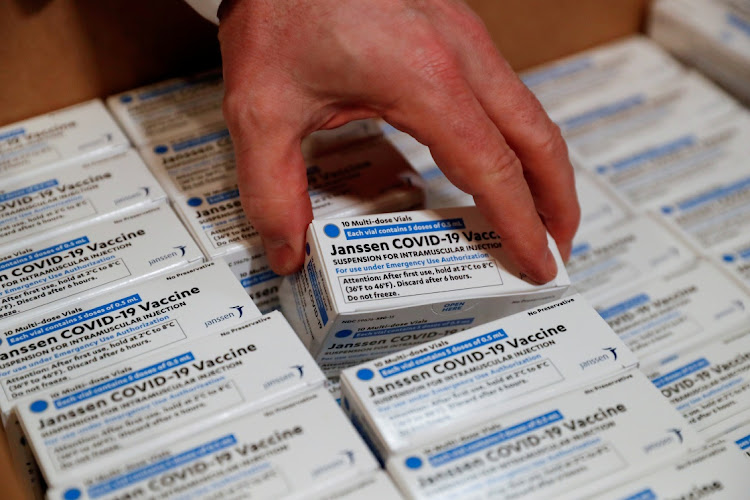 The Johnson & Johnson (J&J) vaccine rollout has been 'provisionally' suspended in SA following an investigation of a possible link between the vaccine and a rare type of blood clot in the brain.
Image: Reuters/Shannon Stapleton/File Photo

The Johnson & Johnson (J&J) vaccine rollout has been “provisionally” suspended in SA following an investigation of a possible link between the vaccine and a rare type of blood clot in the brain.

Health minister Zweli Mkhize made the announcement on Tuesday, saying the suspension might only be for a few days.

The suspension comes after the US Food and Drug Administration (FDA) suspended the use of the vaccination pending a review of a possible link to a rare type of blood clot in the brain reported in six women in the US coupled with low levels of platelets.

The incidents occurred between six and 13 days after vaccination in women between the ages of 18 and 48 years.

The women developed a rare cerebral venous sinus thrombosis, which are blood clots in combination with low levels of blood platelets.

More than 6.6 million citizens have been inoculated with the J&J vaccine in the US.

Suspension of the vaccine in SA

Mkhize said after the FDA issued its advisory,  he held urgent consultations with scientists and they had advised the decision by the FDA should not be taken lightly, despite no cases of blood clots reported in SA.

To date, 289,787 health workers under the Sisonke Protocol have been inoculated.

“Based on their advice, we have determined to voluntarily suspend our rollout until the causal relationship between the development of clots and the J&J vaccine is sufficiently interrogated,” said Mkhize.

He said the SA Health Products Regulatory Authority (Sahpra) will collate information from J&J, the FDA and other regulatory bodies to make a thorough assessment of the situation and provide further guidance.

“I call for calm and patience as we ensure we continue to be properly guided by science in ensuring the safety of our people as we roll out the vaccine campaign,” Mkhize said.

Mkhize warned such reports would emerge as part of a robust post-market surveillance system.

He said this should provide comfort that medical authorities keep a vigilant watch on all new products deployed into the market to ensure they remain safe and effective for human consumption.

“It is for this reason we implemented the Sisonke Protocol and will also implement a similar post-market surveillance study for Pfizer when we roll out the first batch of doses to health workers,” he said.

“We have successfully negotiated for another 10 million doses from Pfizer and expect just under two million of these to be delivered in May. This means we have secured 30 million doses of the Pfizer vaccine for this financial year.”

Sahpra board chairperson Helen Rees said safety was the top priority when it comes to monitoring the vaccine rollout.

“People are worried because vaccines were developed quite rapidly and people are asking if they are safe and how do we know. That’s why we are paying attention to any global safety signals,” she said.

Rees said the number of blood clot cases is “very small” compared to the millions of doses already administered.

“We have to be able to not only look for safety but also say that safety signal actually has to do with the vaccine, or it is just because things happened when you rolled out vaccines to millions of people,” said Rees.

Nearly 300,000 health-care workers have had Covid-19 J&J vaccinations in SA and no very rare blood clots have been detected despite close monitoring.
News
9 months ago
Next Article