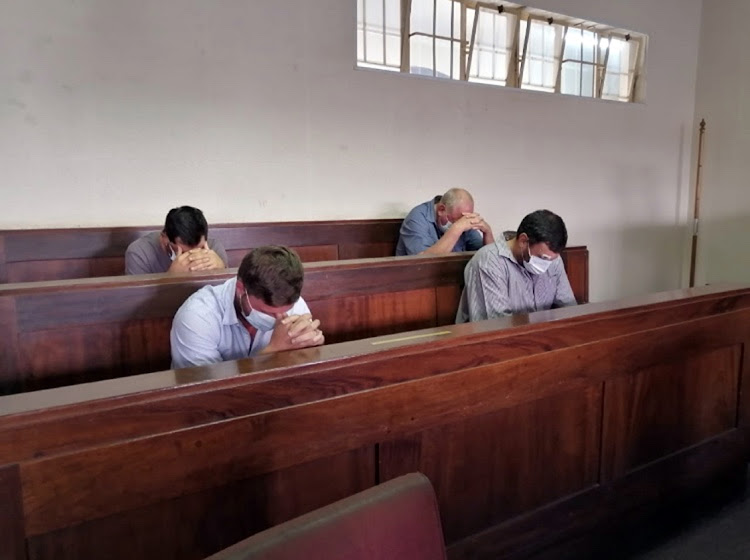 Daniel Malan, 38, Cornelius Greyling, 26, Othard Clingberg, 58 and Michael Sternberg, 31 are accused of fatally shooting the Coka brothers – Mgcini, 36, and Zenzele, 40, – when the siblings were apparently trying to break-up a scuffle between the farmers and job-seekers..
Image: Mandla Khoza

The four farmers arrested in connection with the murder of two brothers in Piet Retief, Mpumalanga, were remanded in custody by the Piet Retief magistrate's court yesterday.

They are accused for fatally shooting the Coka brothers – Mgcini, 36, and Zenzele, 40, – when the siblings were apparently trying to break-up a scuffle between the farmers and job-seekers.

Pictures of lifeless bodies of the Coka brothers were circulated on social media over the weekend. 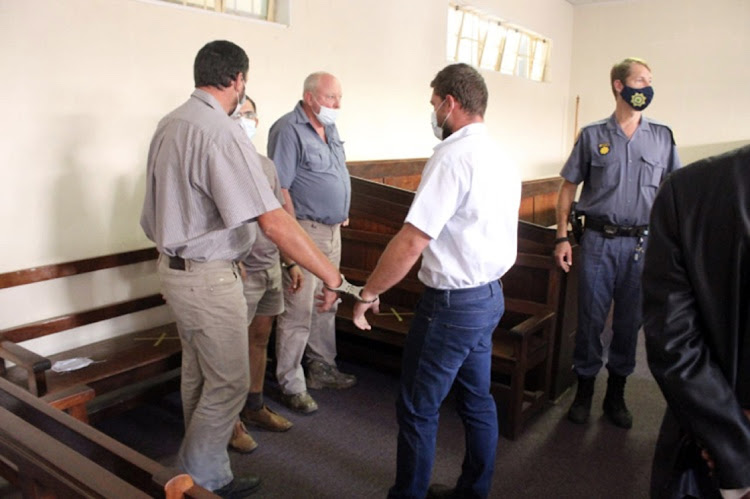 The protesters were holding placards which read, “no bail” and  “racism exists”.

Police used barbed wires to secure the court building and closed off the Kerk and Kruger streets leading to the courthouse.

State prosecutor Sidwell Shingange said the accused are facing two charges of murder and assault with intent to do grievous bodily harm, while one suspect faces an additional charge of defeating the ends of justice.

“The state objects to the bail of the accused. Firstly, this is for their safety and for public safety. Again, this is a schedule six offense and the state also needs to continue with investigations which include ballistics of the firearm of the accused,” Shingange told the court.

He asked magistrate Phindile Mlotshwa to postpone the bail application for seven days to allow police investigations t continue, saying there was a possibility that there could be more charges brought against the accused.

Acting secretary of the ANC in the province Lindiwe Ntshalintshali told protesters that they were happy that the accused would spend seven days in custody before they apply for bail.

Chairperson of the EFF in Mpumalanga Collen Sedibe also raised the party's satisfaction about the first day outcome of the court appearance.

The Coka family said the brothers were not part of the group that went to the farm to seek employment, but were trying to break up a fight when they were gunned down.

Mgcini’s sister-in-law Petty Ndlovu said her brother-in-law had planned to travel with his fiancée to meet his ailing mother for the first time on Tuesday.

She said her sister, who is seven months pregnant, was devastated.

The Coka brothers will be buried on Saturday in Piet Retief.

Black people are reaching a limit of tolerance for unrepentant racists.
Opinion
1 year ago

South Africans urged to unite, not fight, after brutal death of Anele Hoyana

Eastern Cape premier Oscar Mabuyane has called on South Africans not to declare war, but to unite over the death of East London's Anele Hoyana ...
News
2 years ago

A white person kills a black person, then all white people in SA are racists. A black person mugs and injures a Chinese woman, then all black people ...
Opinion
2 years ago
Next Article