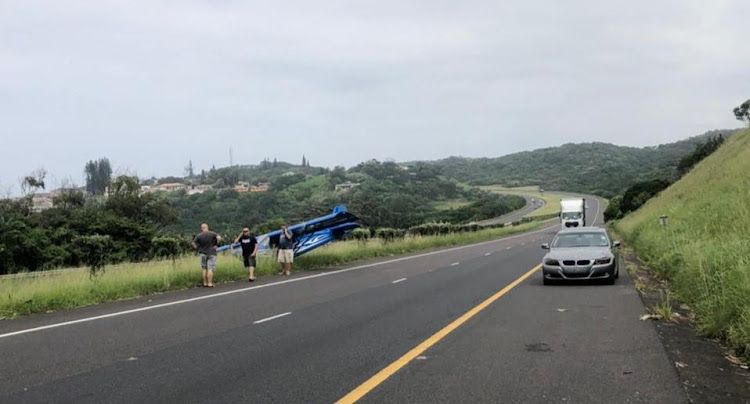 A small, light aircraft had to make an emergency landing on the N2 near Mtwalume on the KZN south coast
Image: Kevin Krummeck

The N2 highway on the KwaZulu-Natal south coast became a makeshift runway for a light aircraft pilot who made an emergency landing on the busy national road on Saturday.

Kevin Krummeck who was travelling from the south coast to Howick, couldn’t believe his eyes when he saw the plane land on the highway.

“My wife and I were driving from San Lameer to Howick when we saw the plane landing in front of us ... It landed in front of a truck, there was an open gap in front of the truck and it came down low.

“The truck driver realised what the pilot wanted to do and pulled back. The plane landed quite nicely along the tar and taxied up the highway and came to a stop.”

Krummeck pulled over on the side of the highway to assist the pilot and his passenger.

“We pulled over and helped them push the plane onto the grassy area in the middle of the road. One wing was still sticking out into the fast lane, so we had to swivel the plane around to make it sure it didn’t get hit and cars could keep going.”

KwaZulu-Natal resident, Kevin Krummeck and a few others help a pilot, who made an emergency landing on the N2 on the KZN south coast, get his plane off the busy road.
🎥 via Kevin Krummeck pic.twitter.com/6YSV30P3Di

According to Krummeck the pilot had taken off from Port St Johns in the Eastern Cape on Saturday morning and was heading to Pietermaritzburg when he started running out of fuel.

“There's a fuel tank in each wing. They have 60 litres in each fuel tank. When one fuel tank empties then the other drains into the engine. However the left wing fuel tank emptied and they had six litres left. When they tried to get the fuel from the other wing, there was a blockage.

“They had to make an emergency landing because they were going to run out of fuel. That's why they landed.”

Krummeck said a friend of the pilot brought them 50 litres of fuel. Once refuelled, the road was blocked off to allow the plane to taxi and take off.