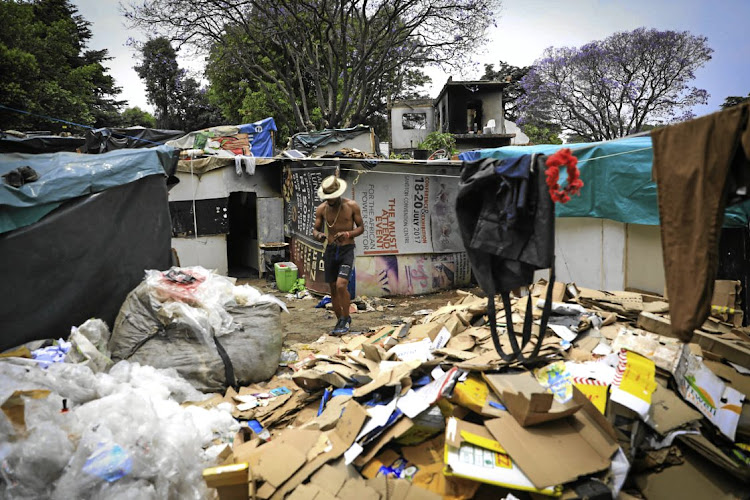 A group of people who 'hijacked' an abandoned house at 21 Bompas Road in Dunkeld West have won a court victory, as their eviction from the property was ruled to be unlawful. File photo.
Image: Sebabatso Mosamo

The high court in Johannesburg has ordered that a group of people who “hijacked” a multimillion-rand vacant house in Dunkeld West were unlawfully evicted and can return to stay there, for now.

Non-profit human rights lawyers the Socio-Economic Rights Institute of South Africa (Seri) took the case of the house invaders - about 50 of whom were evicted by the Red Ants on April 6, leaving their property on the pavement - to court.

The court ruled, “It is declared that the applicants' eviction from their homes at 21 Bompas Street, Dunkeld West, also known as erf 113 Dunkeld West, Johannesburg, is unlawful.”

The court instructed that the property of the current house occupants be returned to the premises.

The Western Cape is spending millions trying to curb the scourge of “orchestrated land invasions”.
News
1 year ago

“The residents are hardworking members of the community who earn a meagre living in the affluent northern suburbs of Johannesburg. Many of them make a living as waste recyclers, car guards, informal traders and gardeners, while others carry out casual manual labour for property owners in the area. They reside in shacks and an abandoned outbuilding on the property, because they have nowhere else to go. Some have lived on the property for 17 years,” said Khusela Bhengu of Seri in a statement.

She explained that the property owner had erred in the reading of an earlier court order which simply stated that no additional people could come onto the property. That order said nothing about the current house occupants being removed.

“In conducting the eviction, the property owners relied on an interim interdict issued by the South Gauteng High Court in February 2021 protecting their property from further occupation. The interim interdict does not constitute an application for eviction and does not apply to the occupiers who had already been in occupation. The failure to seek a court order deprives the residents of the protections they are entitled to in law,” said Bhengu.

The property owner would need to navigate additional obstacles to have the occupants removed from the property as they are protected by the Prevention of Illegal Eviction from and Unlawful Occupation of Land Act, known as the PIE Act.

Bhengu explained that the act said: “The residents [in this case, the home or land invaders] are entitled to written and effective notice of any proceedings to evict them; to be evicted only where it is just and equitable to do so; and to be provided with alternative accommodation, where an eviction would otherwise lead to homelessness.

“The residents have been evicted from the property, in breach of all these entitlements. These attacks happen despite a moratorium on evictions and are a direct contravention of the regulations in terms of the Disaster Management Act,” she added.

The homeowner's bid to obtain a final interdict to have the occupants removed will continue.

“During the eviction, residents lost their homes and most had their furniture and personal possessions destroyed, resulting in the elderly and mothers with infants having to sleep on the street.

“In addition to being evicted from their homes, the residents have had to endure harassment and intimidation from law enforcement and private security.”

TimesLIVE has followed the fate of the hijacked property since 2020.

The owner of the house is believed to be overseas. Neighbours have complained of noise, illegal brewing and drinking, and safety hazards on the once upmarket property.

While Seri claims some people have been living at the house for the past 17 years, local ward councillor Martin Williams said problems there surfaced in 2017 when a group moved in and the numbers kept swelling.

“In March 2017 I formally asked for a problem property file to be opened for 21 Bompas Road and for entities to investigate. It is an owner-abandoned, derelict and half-demolished health hazard. There were about 55 people living there illegally in unsanitary conditions,” Williams said.

He said in July 2017 a stabbed woman’s body was found there.

Williams said he had tried everything in his power to get city authorities to remedy the situation, but said they were not successful due to limitations on what they can do on private properties.

As the legal battle continues to have the group removed from the property, it is costing the homeowner. After the last court proceedings, the court ruled that the respondents who had instigated the evictions foot the legal costs of the home invaders.