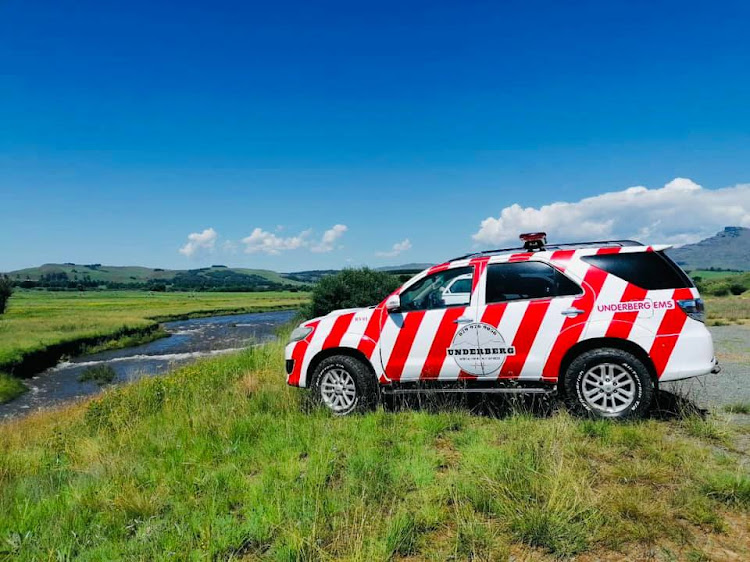 Paramedics were called out to help a hiker who was bitten by a puff adder near Underberg at the weekend.
Image: via facebook

Hikers have been warned to be extremely cautious after a second puff adder attack in the Drakensberg in KwaZulu-Natal within a week.

A 38-year-old man was hiking in the southern Drakensberg at the weekend when he was bitten by the venomous snake.

Last week a 15-year-old boy was hospitalised after being bitten by a puff adder along the Drakensberg Gardens road in the Underberg area of KwaZulu-Natal.

According to a Facebook post by Underberg Emergency Medical Services (UEMS), a team was dispatched on Saturday afternoon to Bushmans Nek border post, after “a local who stated that a guest of theirs had been hiking in the Southern Drakensberg, near The Bushmans Nek Border Post, when he was bitten by a puff adder”.

According to UEMS, Ezemvelo rangers had gone out on horseback along the hiking trail to fetch the injured man.

“Fortunately, after assessing the 38-year-old male patient, it was established that the puff adder had struck and bitten his shoe.

A 15-year old holiday maker was discharged from hospital on Sunday after being bitten by a puff adder in the Drakensberg.
News
1 year ago

“The snake had managed to leave a small single puncture mark to his right foot, but on inspection, no swelling or excessive bleeding was noted, indicating a possible dry bite.”

Paramedics treated the man and then transported him to a Pietermaritzburg hospital for further care.

“This is the second snake bite in a week in Underberg. Please be extremely cautious and vigilant when hiking in the Berg,” UEMS warned.

According to reptile enthusiast Tyrone Ping, puff adders are SA’s most widely-spread venomous snakes and together with the Mozambique spitting cobra account for the majority of serious snake bites in SA.

Ping says on his website that they have a powerful cytotoxic venom which can lead to extreme pain, severe swelling and blistering of the skin.