A man handed himself over to cops

#JusticeforSpha: What you need to know about man killed in homophobic hate crime 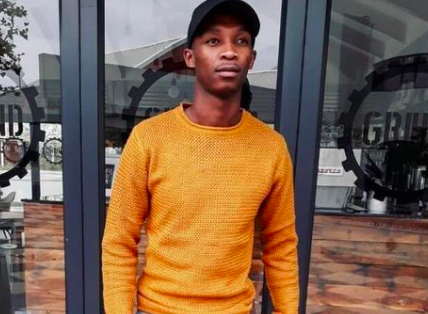 The LGBTQI+ community is outraged and demanding justice for the murder of Sphamandla Khoza, who was stabbed to death and dumped in a ditch near his home in Ntuzuma, eThekwini, last Monday.

Khoza's death is suspected to be a homophobic hate crime.

Spha was killed by 'people he knew'

According to Ndumiso Daluxolo Ngidi, who identified himself as Khoza's cousin, the deceased was attacked and murdered by men he knew, who grew up and lived with him in the same neighbourhood.

In a Facebook post, Ngidi said Khoza's body was found in a sewerage manhole and his shoes were found in front of his home.

“They ganged up on him, stabbed him repeatedly while he was out having fun in one house in the neighbourhood. Not only did they murder him, they threw his lifeless body in a sewerage manhole. They took off his shoes and placed them in front of the gate at his home,” said Ngidi.

“Basically, they were putting him in a grave and used his shoes as a form of a trophy. If it wasn’t for blood trails leading to where they dumped his body and curious people who followed this blood trail, we would have never found his body.

“All this happens after they insulted him about his sexuality. They treated him worse than a stray animal. I am angry. I am hurt. Such a beautiful life lost all because of hate.”

My cousin, Sphamandla Khoza was attacked and murdered by men he knew, who grew up and lived with him in the same...

The place Spha was last seen before his death

Ngidi said Khoza had been drinking with about four other men when he was humiliated for his sexuality, before he was found dead.

According to EWN, Ngidi said an altercation started after one of the men refused to share his beer with Khoza.

“That was the last anyone saw him alive,” said Ngidi.

“He was going to turn 35 this year, and he was employed, just a bubbly, loving person. He had a partner who he lived with, together with his grandmother. Spha adored his grandmother and they had a really good relationship.”

One suspect in court

On Thursday last week, before Khoza was buried on Sunday, his loved ones carried Pride flags in a march through his neighbourhood.

The march ended with a vigil at the ditch where his body was found, which activists filled with candles.

According to News24, KwaZulu-Natal police spokesperson Col Thembeka Mbele said one person had handed himself over to police last Tuesday and appeared in court on Thursday.

On social media, the hashtag #JusticeForSpha topped the trending list as many expressed their grievances and called for justices to be served.

Sphamandlas case will be heard in court today and his suspected killer will appear before court.#justiceforspha pic.twitter.com/XmaOLbAnIu

There are many places I'd like to experience but I worry about my physical safety. They are literally chopping our heads off. #JusticeForSpha

Lindo Cele, Sphamandla Khoza. Homophobia is DEADLY. Unless you think gay people deserve to be beheaded or stabbed in their heads and eyes... say something. Make people know its not okay. LGBTIQ+ people deserve dignity and LIFE. #NOMIDDLEGROUND 🏳️‍🌈🏳️‍🌈🏳️‍🌈🏳️‍🌈

Wow 😭😭😭 no one deserves to die like that!! How evil one can be to kill someone like that because of their sexuality yhoo 💔💔💔how do you even sleep at night? 😔 #JusticeForSpha

When we say that your little timeline homophobia jokes have real life consequences, it’s all seen as a overreacting. Now look at what one of your people have done. #JusticeForSpha

Media personality Macgyver Mukwevho, known as MacG, has lost a main sponsor of his YouTube series podcast following the latest episode which was ...
Entertainment
1 year ago

I was beaten for using women's toilets - gay man

Feeling uncomfortable sharing a toilet space with an LGBTIAQ+ person says a lot about you.
Lifestyle
2 years ago
Next Article