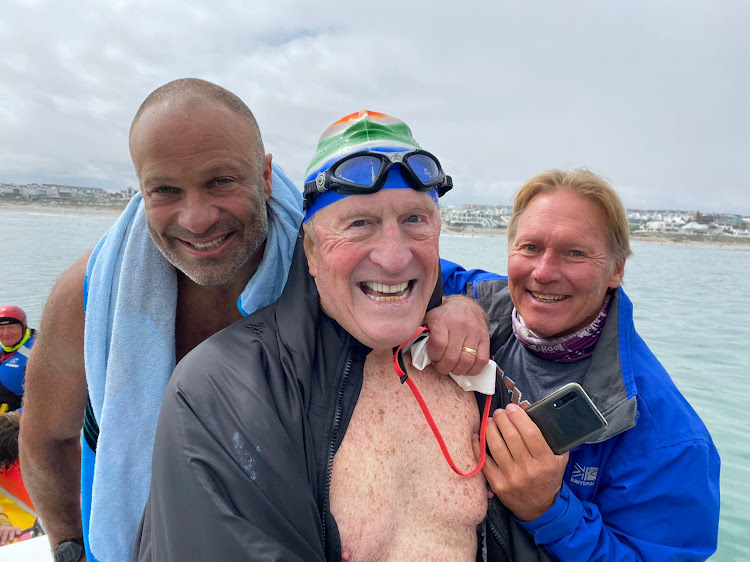 Cape Town heart surgeon Otto Thaning has, at 80, become the oldest person to swim the 7.5km from Robben Island to the mainland.

Pugh and Thaning were the first people recorded to swim across Lake Malawi in 1992, and the surgeon is also the oldest man to swim the 34km English Channel, which he did in 2014 aged 73.

Pugh said Thaning was an incredibly efficient swimmer. “What makes his crossing even more astonishing is that he operates during the week,” he said.

“Sometimes he comes to training and says, ‘Long day, Lewis. I had to stand on my feet operating for six hours.’”

The annual historic Robben Island Valentine’s Day weddings have been cancelled for this year, Robben Island Museum said on Friday.
News
2 months ago

Pugh said Thaning represented a new frontier in cold water swimming. “I joked with him after the swim that I was going to beat his record one day, and Otto turns to me and says, ‘OK Lewis, see you in 2049.’ That really puts it into perspective.”

“Many people think they can’t swim a Robben Island crossing, but Otto has shown us it is possible, even at the age of 80. He is an incredibly accomplished swimmer, but this swim also means we can all rethink our limitations,” she said.

Thaning said when he swam the English Channel he wanted to demonstrate that age was not necessarily a barrier to physical endeavour.

“I said that long ago and I still firmly believe it. I trained a lot with the late, great Theodore Yach, who did 108 Robben Island crossings, and his attitude was that you have to get into the cold and let it lubricate your joints. But you also have to enjoy it afterwards.”

Thaning said there is no such thing as an easy Robben Island swim and he planned many more crossings.

“Dr Thaning is the epitome of his profound guidance and a widely respected role model for the entire swimming community.”