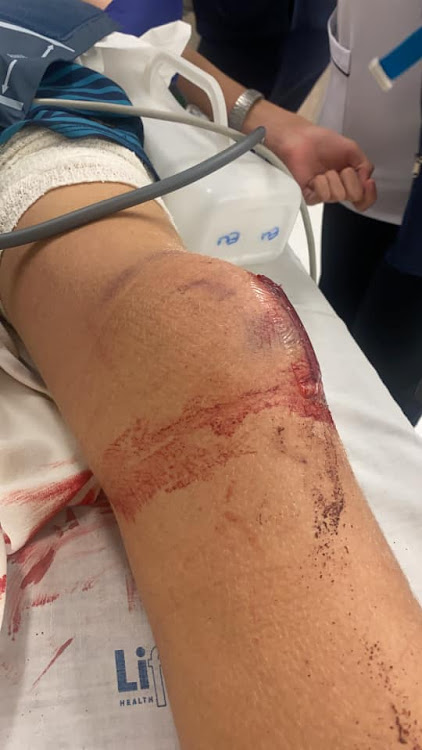 A 15-year old boy was hospitalised after he was bitten by a puff-adder
Image: UEMS

A 15-year old holidaymaker was discharged from hospital on Sunday in “good spirits” after being bitten by a puff adder in the Drakensberg.

Underberg Emergency Medical Services responded to a call for help on Friday morning after a boy was bitten by a snake at 3 pools along the Drak Gardens road, in KwaZulu-Natal.

The emergency services posted: “On assessment, the 15-year-old male had sustained a snake bite to the left knee. As per the patient and father, they believed it was a puff adder. On closer inspection, the signs indicated that it was in fact a puff adder bite.

“The patient was stabilised by UEMS paramedics as well as Dr Alan Howard and transported to a Pietermaritzburg hospital for further specialised treatment. On arrival at the Pietermaritzburg hospital, a surgeon, doctors and nurses were waiting for us. The patient immediately received 8 ampoules of anti-venom and will be kept in ICU for observation.”

According to reptile enthusiast Tyrone Ping, puff adders are SA’s most widely-spread venomous snakes and together with the Mozambique Spitting cobra account for the majority of serious snake bites in SA.

Ping says on his website that they have a powerful cytotoxic venom which can lead to extreme pain, severe swelling, and blistering of the skin.

In an update on Sunday, UEMS said the teen was discharged on Sunday.

“UEMS is extremely pleased to report that the young man is being discharged from Hospital today. He is doing extremely well and in high spirits.”