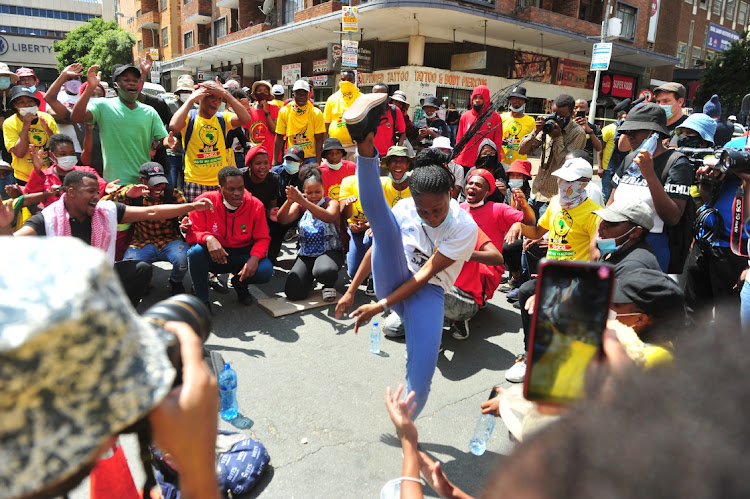 University students recently displayed concerns that the proposed debt relief mechanism by the institutions to enable them register for 2021 academic year will work against them next year. The have now called off a national protest after government reacted positively to their demands.
Image: Thulani Mbele

The union announced this on Wednesday afternoon after they had a number of stakeholder engagements to advance the demands of students which were tabled to Nzimande.

Student union spokesperson Thabo Shingange said following the mandate from student representative councils (SRC) to expedite engagements with Nzimande, SAUS met with the minister on Monday and reported back to SRC’s on Tuesday.

Shingange said the meeting reflected on the last two weeks; the interventions and developments which have been made across the sector against the backdrop of the 15 demands tabled to the minister.

"Subsequent to the call for a national shutdown, the minister reallocated ±R7 billion back to NSFAS following earlier budget cuts. As a result, first-time students are now able to register. A significant number of universities have started to unblock students with debts to enable smooth registration. Also 22 out of the 26 universities agreed to suspend academic exclusions for the 2020 cohort of affected students," he said.

Shingange said registration has  been extended by two weeks and  discussions were underway for further extension to accommodate all unregistered students.

“A total of 17 universities are already providing students with academic records, a process has been put in place between DHET, SAUS and USAF to ensure that the other 9 universities do the same. SAUS also welcomes the R30 million intervention from the premier of Eastern Cape Oscar Mabuyane to fund needy students at Walter Sisulu University, Fort Hare, Rhodes and Nelson Mandela University,” he said.

It has also been agreed that 643,000 students who were on the verge of financial exclusion managed to register in the last two weeks through online registration.

SAUS was also able to raise a R5m donation from one CETA to fund needy students who are studying towards Built Environment and Critical Skills qualifications, while all NSFAS-funded students are now being allowed to register without having to pay the Minimum Initial Payment (MIP) or registration fees.

Laptops from NSFAS will be distributed to the qualifying students in the next three weeks, with SAUS being part of the distribution team to ensure that all deserving students received their devices on time.

A Rapid Response Ministerial Task Team has been immediately put in place comprising department of higher education and SAUS to deal with specific issues and resolve matters such as academic records, funding of  post-graduate students, outstanding registration queries and accreditation of student accommodation.

The problem of the R13bn student debt has been successfully placed on the national agenda again, and a process has been established to categorise the debt properly so that proposals for a solution can now be tabled to parliament.

The SAUS has described recent comments made by minister of higher education Blade Nzimande as "reckless, unnecessary and irresponsible considering ...
News
2 months ago
Next Article