Bheki Cele says if court asks to enforce law on Jacob Zuma, arrest will be made 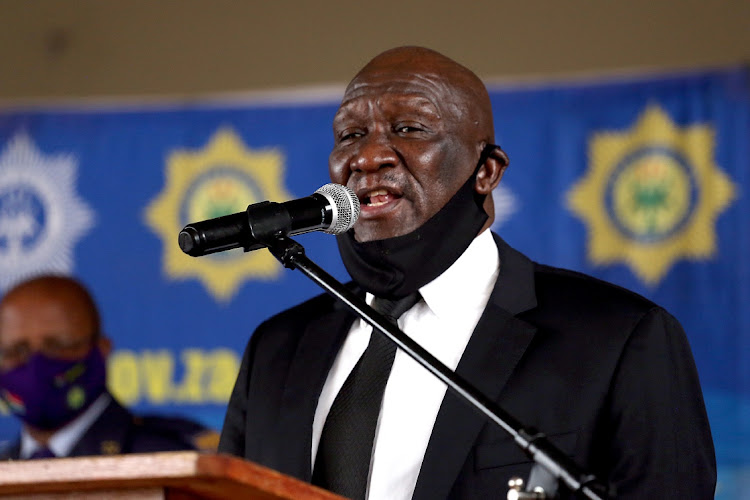 Police minister Bheki Cele said police are waiting for the Constitutional Court to give the green light to act regarding the arrest of former president Jacob Zuma.
Image: MARK ANDREWS

Police minister Bheki Cele says should the Constitutional Court call for enforcing the law for the arrest of former president Jacob Zuma, it will be done.

Speaking on 702, Cele said police are waiting for the ConCourt to give the green light to act on the matter regarding the arrest of Zuma.

“The call to enforce the law should not have any negative impact, like people dying like in Marikana. It should happen in a smooth, legal and peaceful way,” he said.

Cele said when he visited Zuma at his Nkandla homestead in KwaZulu-Natal in February, he told him to allow the law to take its course to avoid any “disaster” going forward.

“We spoke to Msholozi to allow the law to follow its course and make sure everything was within the law so we don’t have a repeat of the Marikana massacre and other disasters,” he said.

The ConCourt is expected to announce its verdict regarding Zuma after it heard submissions from the state capture inquiry’s counsel Tembeka Ngcukaitobi calling for the former president to be jailed for ignoring a ruling which ordered him to appear before the inquiry chaired by deputy chief justice Raymond Zondo.

The inquiry requested the ConCourt to sentence Zuma to two years in jail for his refusal to testify at the inquiry, despite a summons and a court order from the highest court to do so.

The inquiry said it believes the two years’ jail time was needed to reflect the expectation of society that a person in a leadership position “with immense influence should comply with the law rather than displaying contempt of the law”.

Zuma did not participate in the hearing but instead issued a statement in which he lambasted SA judges and those of the ConCourt. He said he has lost faith in many judges.

“Many SA judges, including those of the ConCourt, can no longer bring an open mind to cases involving me,” said Zuma.

“The Constitutional Court has allowed itself to be abused in this manner and the repeated warnings I have made in this regard continue to go unheard simply because they emanate from me.”

Zuma called the inquiry “inefficient” and “incompetent”, saying this was the basis for an urgent application to the ConCourt, based on the fact the inquiry was running out of time.

“The fact is the commission has failed to regulate its own costs and processes in allowing itself to waste time pursuing all sorts of evidence under the sun which have nothing to do with their terms of reference,” he said.

The inquiry is set to complete its report by June 30.

The EFF has become the latest organisation to mount an attack on state capture inquiry chairperson deputy justice Raymond Zondo.
News
1 year ago

Former president Jacob Zuma says he will not subject himself to "an oppressive and unjust court system".
News
1 year ago

Zondo commission has given up efforts to coerce Zuma

The Zondo commission of inquiry into state capture has given up all efforts to coerce former president Jacob Zuma to appear before it and testify on ...
News
1 year ago
Next Article