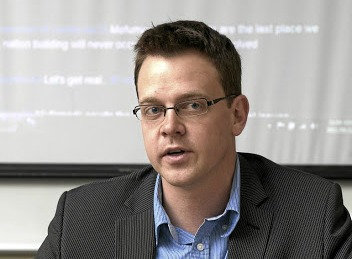 AfriForum policy head Ernst Roets was on the receiving end of MPs' wrath on Wednesday after he insinuated that they did not properly represent voters.

Roets — who was presenting during parliament's oral representations on the amendment of section 25 of the constitution — was slammed, with both EFF deputy president Floyd Shivambu and former party spokesperson Mbuyiseni Ndlozi calling him racist.

The proposed amendment of section 25 will give rise to expropriation of land without compensation, something AfriForum is strongly opposed to.

But it was Roets's comments about MPs that drew their ire after his reply to a question by committee chairperson Mathole Motshega about AfriForum's international lobby against the change.

“The Freedom Charter said that the people of SA as a whole are entitled to the right to determine their own destiny, and that, in the Harare declaration, South African people, with the backing of the [AU], develop a process for addressing their own issue without foreign intervention.

Civil rights group AfriForum has filed an application to the state capture commission to cross-examine President Cyril Ramaphosa on the ANC's cadre ...
News
1 year ago

“Do you believe in the capacity of South Africans, both black and white, to find solutions for their own problems? If so, can you explain why you rushed to the United Nations to raise concerns about processes in the country before South Africans themselves sit, as we are sitting now, to deal with these issues?” asked Motshega.

In his reply, Roets said he had confidence in South Africans — but not in their elected leaders. He added that “the problem is the people aren't properly represented in parliament”.

“There was a study done, it might have been an institute for justice and reconciliation ... they did a poll asking politicians what their priorities were and it turns out that education was, for example, number 16, on average. If you interview people in SA and you ask them what are the biggest problems that need to be resolved and you take that list you flip it upside down, then you find the list of priorities by most of the people who are sitting in parliament,” said Roets.

ANC MP Dibolelo Mahlatsi took issue with the answer, asking why Roets decided to participate in the process to amend section 25 if he had no confidence in MPs.

Another ANC MP, Cyril Xaba, also took issue with Roets, saying the comments meant he does not recognise the country's parliament.

Shivambu seemed more angered by the comments, going as far as calling Roets a “racist fool”.

He said the process of the hearings was so inclusive that it even allowed “racist children and children who come and undermine this particular process”.

“That is what we have been doing, listening to absolute nonsense and rubbish from people ... Why would you even suggest that a democratic parliament that has been voted in by a huge percentage of eligible voters is not legitimate? Is it because it's not a whites-only parliament?” said Shivambu.

He further called Roets's comments “nonsense”, saying he was taking MPs for granted and deliberately provoking them.

Ndlozi joined in on the conversation, saying the committee should invoke its authority.

“It is wrong and I make it unequivocal that it is motivated by racial patronisation that actually informs AfriForum,” said Ndlozi.

He added that AfriForum's stance was wrong.

“They are saying that because they are racist as an organisation. Roets is racist,” he said.

But Roets would not back down, saying he did not say parliament was illegitimate. He further took a swipe at Shivambu.

“Mr Chairperson, we can all pretend that we are really important, we can all pretend that the people in SA have great respect for parliament and that the people in SA love their politicians. But that doesn't detract from the humour and the irony and the fact that a corruption connoisseur like Floyd Shivambu is trying to lecture us on how to run a country,” said Roets.