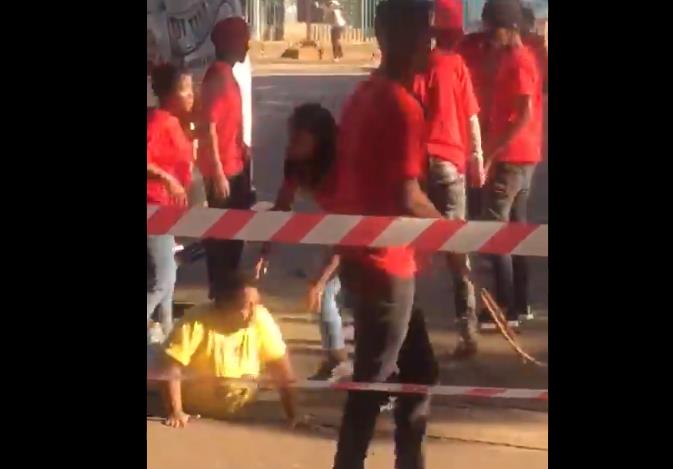 Members of the EFF student command and Sasco clashed at the Durban University of Technology on Tuesday.
Image: Screengrab from Twitter

Five students were stabbed during violent clashes allegedly between members of the EFF student command and the South African Students Congress (Sasco) at the Durban University of Technology on Tuesday morning.

“They were taken to a campus clinic for medical attention. Police are at the scene to monitor and stabilise the situation, which is quiet at the moment. No case was opened [but] victims were advised to open cases,” Gwala said.

I did not take this video, it was sent to me by a DUT student, he says the incident happened this morning. We see EFFSC and SASCO members physically attacking each other. #DUT pic.twitter.com/Bn1tFCjfAn

Speaking to TimesLIVE on Tuesday, Sasco head Malwande Ndobe said the clash followed threats reported by their members on Friday.

“Comrades reported that they were threatened on Friday not to go ahead with our annual right to learn campaign where we assist first-year students with access to funding, study spaces and other things. However, we understand that the EFF comrades were not planning to do this and didn't want our comrades to go ahead.

“When our comrades set up their tables on Tuesday morning, they were confronted by the EFF students who started attacking them.”

Ndobe said one of their members was trampled and his arm broken while another was critically injured.

“You will see from the video that they were throwing boulders and males were attacking our female comrades. Who does this when we are busy fighting a GBV war?”

The council said the higher education funding crisis is entrenched in the country’s debt and economic woes, compounded by a global pandemic.
News
1 year ago

Two students who were allegedly part of ongoing fees protests in Braamfontein, Johannesburg, have been arrested for being in possession of an illegal ...
News
1 year ago

He said they were in the process of laying criminal charges.

However, EFFSC DUT secretary Sandiso Buthelezi claimed that the fight was sparked by “thugs” who were opposed to their student body exposing criminal opportunism.

“We have reported to DUT management that there have been several incidents where vulnerable students have been victims of cybercrime and opportunism in which they have been made to pay for services that have turned out to be a scam.

“These are deeply rural students who don't know anything about how the campus operates or about Durban, especially during this time when everything is online. In addition to that we have an issue with the management and [higher education minister] Blade Nzimande with regard to our students who haven't been able to access funding as well as students who failed last year because they didn't have laptops and data. We are determined to have these students registered this year.

“This morning two of our members were attacked and stabbed by these thugs — some criminal elements which we pointed out to the police. Our fight is not with the student body, but with management who aren't doing anything to protect our students.”

Buthelezi said his members would bring criminal charges once they were discharged.

Adam Habib steps aside as N-word investigation gets under way

SOAS board chair confirmed that former Wits vice-chancellor Prof Adam Habib would step aside while the probe was under way - 'so as not to compromise ...
News
1 year ago

Caf president Patrice Motsepe has called on South Africans to help young people who are struggling to access higher education due to lack of funding.
News
1 year ago
Next Article