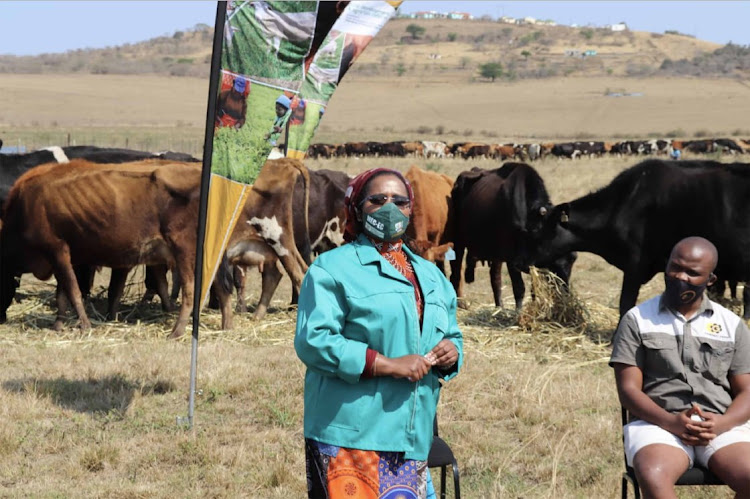 Former rural development and agrarian reform MEC Nomakhosazana Meth during her visit to Mantusini Dairy Trust Farm in rural Port Saint John’s where she donated 160 tons of feed and promised to bring an investor to help the farm.
Image: SUPPLIED

Eastern Cape’s new rural development and agrarian reform MEC Nonkqubela Pieters has appointed a team of senior officials to conduct an investigation into allegations of mismanagement at the Mantusini dairy farm.

Pieters and senior officials visited the farm on Monday to see for herself and interact with stakeholders in an effort to address the situation.

Spokesperson Masiza Mazizi confirmed that the MEC had visited the farm and met members of the trust, workers, traditional leaders and the community.

The farm was started by 450 Mantusini villagers in 2005 and grew to receive support from government.

In 2016, then rural development and land reform minister Gugile Nkwinti injected R18m worth of state-of-the-art resources to benefit 400 households involved in the farm.

By last year R43m in state funding had been pumped into the farm.

Public protector Busisiwe Mkhwebane will be the first head of a Chapter 9 institution in SA to face impeachment proceedings.
News
2 months ago

''The situation is dire. Animals have not been milked for more than two weeks. There is no water due to a broken power cable to the water pump. This needs to be sorted out urgently for the welfare of the cows. There are about 148 cows subsisting on natural pasture. They are starving and in need of supplementary feeding..."

The MEC's visit and investigation came after DA shadow MEC for rural development and agrarian reform Retief Odendaal visited the farm two weeks ago and made the shocking revelation of how hundreds of dairy cows had been left to starve to death. Their rotting carcasses were left lying in open fields for the vultures.

Odendaal demanded that the department intervene and do a full audit to ascertain how the R43m had been spent and whether there had been any financial impropriety in the project.

During the DA inspection of the facility, it was found that operations at the dairy had stopped altogether.

''Despite the state-of-the-art equipment, cows have to be milked by hand as Eskom disconnected electricity to the farm due to non-payment. Representatives from the Mantusini Dairy Trust said their cows had perished on a large scale during the winter due to unavailability of feed. Many cows died due to starvation,'' said Odendaal.

Explosive testimony delivered on Thursday before the commission of inquiry into state capture revealed how the Gupta’s Estina dairy farm project was ...
News
5 months ago
Next Article