'Human Rights Day for who, for what? Call it Sharpeville Day!' 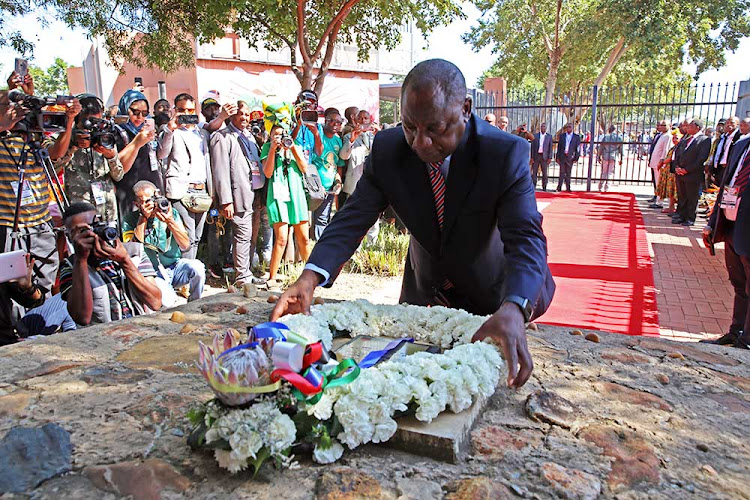 Before Covid-19: On a previous Human Rights Day, President Cyril Ramaphosa laid a wreath in Sharpeville in honour of the fallen heroes killed while protesting against the apartheid government's pass laws. This year he did a virtual address.
Image: Thapelo Morebudi

President Cyril Ramaphosa promised South Africans on Human Rights Day he would help build a new economy but opposition leaders used the anniversary of the 1960 Sharpeville shooting to remind the government of its failures.

Ramaphosa, in a virtual address on Sunday, in commemoration of the 69 people shot dead by police for protesting peacefully against the apartheid government's pass laws, said SA was currently part of a struggle “far greater than ourselves”.

“It is not a fight for our own piece of bread, for our own jobs to be saved, or for our own health and safety. It is a fight to preserve our common humanity,” said Ramaphosa, calling on labour, business and communities to work with the government to build a new economy.

This new economy, he said, would also ensure that basic human rights, as enshrined in the constitution, are upheld. These include, among other things, the right to jobs, dignity, freedom of association, safety and education.

"To deny people their human rights is to challenge their very humanity.
To impose on them a wretched life of hunger & deprivation is to dehumanise them" #NelsonMandela #HumanRights #HumanRightsDay pic.twitter.com/FiDzfzYjff

These would be made possible, Ramaphosa said, through the government’s economic reconstruction and recovery plan that was introduced after the destruction of the country’s economy by the pandemic.

He said South Africans all shared a common goal: to defeat the pandemic.

“Though we may have our differences on a number of issues, we have far more in common ... We have a common vision: of a better, more inclusive society.”

But DA leader John Steenhuisen, in his Human Rights Day message, was scathing of the “government's vaccine failure”, describing it as a “shameful violation of human rights”.

“We cannot celebrate Human Rights Day today and not reflect on this terrible violation of the rights of South Africans to health care and the protection they should be afforded by a large-scale vaccine rollout. The DA will not let government off the hook, and we will not rest until every South African who wants the vaccine has received it,” said Steenhuisen.

EFF leader Julius Malema said the name of the public holiday should be changed from Human Rights Day to Sharpeville Day.

“We must call it by its rightful name ... it's Sharpeville Day. They call it Human Rights Day so that they distort the history of SA, so you don't know what this day is about.

“Human Rights Day for who, for what, where?," asked Malema.

Action SA’s Herman Mashaba said those who gave their lives in Sharpeville 61 years ago would have been greatly disappointed in SA today.

“For too many South Africans, human rights is an academic term in our constitution — something they know exists on paper ...

“Most South Africans will tell you that the covenant of human rights, forged in stone on March 21 1995, has been broken over the past 27 years.”

They refer to this day as Human Rights day to distort the history of South Africa.

This is a day where Black people where slaughtered by white people because Black people were fighting for their rights. #RememberSharpville pic.twitter.com/tGZV999FxZ

To fix this, SA needs to remove the ANC as the national government, said Mashaba.

“When we have unseated the ANC, the problem holding our country back, we can start to give human rights the meaning that was intended in our constitution.”

Parliament’s presiding officers had a different view. The speaker of the National Assembly, Thandi Modise, and the chairperson of the National Council of Province, Amos Masondo, said Human Rights Day was a reminder of the importance of “our hard-won human rights and freedoms as well as the price paid to attain and protect them in the constitution of our non-racial, democratic SA”.

March 21 1960, apartheid police opened fire on a peaceful anti-pass laws protest, killing 69 people. The #SharpevilleMassacre61 is a milestone on SA's liberation & is remembered as #HumanRightsDay in SA & International Day for the Elimination of Racial Discrimination globally. pic.twitter.com/QgwQ7tFLyu

“Human Rights Day is also an opportunity to assess how far we have come in entrenching these human rights and values, particularly as we continue to combat the deadly Covid-19 pandemic ...

“We are all too aware that much needs to be done to reduce and eliminate the still lingering inequalities in our society that undermines our democratic rights.

“Covid-19 and the need to lessen its spread and health risks has brought these social ills into sharper focus and exacerbated the inequality and poverty, corruption, gender discrimination and gender-based violence still plaguing our society.

“Parliament is mindful of the role it must play and commits to fulfilling this role.”