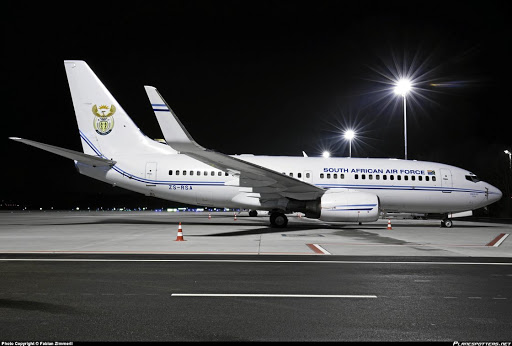 Ramaphosa is expected to attend the funeral of Tanzanian president John Magufuli in Dodoma on Monday.
Image: Planepottersnet

President Cyril Ramaphosa is expected to fly to Dodoma, Tanzania, on Monday to attend the funeral of President John Magufuli, Tanzania’s fifth president.

Magufuli’s death was announced by his vice-president Samiah Suluhu Hassan on Wednesday after he was not seen in public for two weeks.

The official explanation for his death was that he died of heart failure amid speculation that he had fallen ill with Covid-19 and was being treated in hospital abroad.

Magufuli recently came under fire domestically and internationally for his claims that there was no Covid-19 in Tanzania after the country stopped reporting Covid-19 data in May last year when the country said it had 509 cases and 21 deaths.

He was fiercely sceptical of Covid-19 and vaccination efforts and he thanked China's state councillor Wang Yi for not wearing a mask before shaking his hand when he led a Chinese delegation on a visit to Tanzania in January, claiming it was a sign that China affirmed Tanzania’s belief that it was Covid-19 free.

The rest of the Chinese delegation, however, did wear masks.

“President Cyril Ramaphosa will today, Monday March 22 2020, undertake a visit to Dodoma, the national capital of the United Republic of Tanzania, to attend the funeral of the late Tanzanian president, His Excellency John Pombe Magufuli,” read the presidency press release on Monday.

'This is a struggle for all of us far greater than ourselves. It is not a fight for our own piece of bread,' Ramaphosa said.
News
1 year ago

The statement said Magufuli died on Wednesday, March 17, in a Dar es Salaam hospital at the age of 61.

A Reuters report on March 11  quoted opposition leader Tundu Lissu who claimed that Magufuli was in a hospital in India where he was being treated after falling into a coma due to Covid-19 related illness.

Magafuli was seen as a populist leader who introduced economic reforms to Tanzania, including austerity measures aimed at cutting government borrowing and fruitless spending.

He was also celebrated for his anti-corruption stance and his presidency, which started in 2015, oversaw a continuation of the country’s strong GDP growth, boasting one of the highest growth rates in Africa at 5.8% in 2019, according to the World Bank.

He also reportedly reduced his own salary from US$15,000 to US$4,000 per month after he came to power and slashed his cabinet from 30 ministers to 19 to cut costs.

His presidency also oversaw the erosion of civil liberties in the lead-up to Tanzania’s 2020 elections with independent observers Tanzania Election Watch casting doubt over the fairness of the election amid widespread intimidation and a lack of transparency.