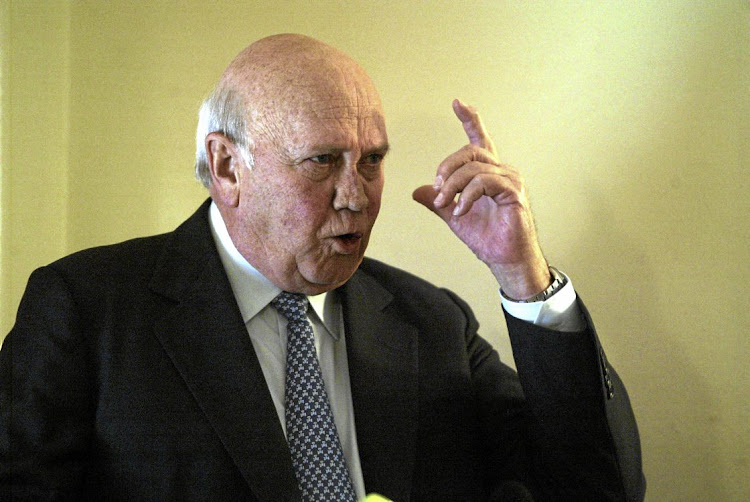 Former president FW de Klerk has confirmed that he has cancer affecting the lining of his lungs and is to undergo treatment.

De Klerk said on his 85th birthday, on Thursday, that he had been diagnosed with mesothelioma. The announcement comes less than a year after his son Willem died of cancer in Durbanville at the age of 53 in October.

Mesothelioma is a cancer that affects the tissue that lines the lungs, the FW de Klerk Foundation said in a statement. De Klerk is due to start an immunotherapy course next week.

“There is no immediate threat and we are confident that the treatment will be successful,” said the foundation.

De Klerk was the last president of white minority rule in SA and ruled over the final years of apartheid between 1989 and 1994. He served for two more years as deputy president to Nelson Mandela.

De Klerk won the Nobel Peace Prize along with Mandela “for their work for the peaceful termination of the apartheid regime, and for laying the foundations for a new democratic SA”.

“In 1990 SA's President Frederik Willem de Klerk decided to release Nelson Mandela, leader of the liberation movement, who had been in prison since 1963. Following the release, the two politicians worked together to bring an end to the policy of racial segregation. It was for his participation in this peace process that De Klerk was awarded the Peace Prize in 1993,” reads an extract on The Nobel prize website.

As the leader of the National Party, the party which initiated and whose official policy was apartheid, he announced broad reforms and plans for a new constitution.

They included the unbanning of liberation movements, the release of political leaders from prison, and the start of negotiations for a transition to a democratic country.

De Klerk’s legacy is still, however, marred by controversy. He is accused by the EFF and other interest groups of instigating violence as the head of state during the final days of apartheid.

During the state of the nation address in February last year the EFF called for De Klerk to be removed from parliament.