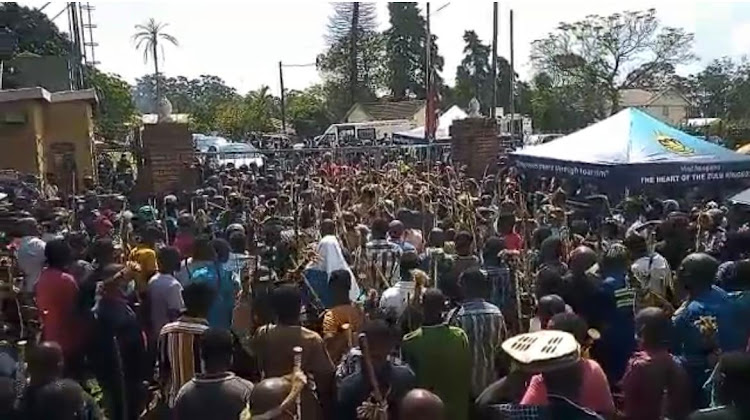 Amabutho stand outside the entrance to the KwaKhethomthandayo Royal Palace in Nongoma on Thursday, demanding to be let inside.
Image: Sandile Ndlovu

An improvised exit had to be arranged for dignitaries to leave the KwaKhethomthandayo Royal Palace in Nongoma, northern KwaZulu-Natal, on Thursday after disgruntled amabutho blocked the entrance to the palace where the official memorial service for King Goodwill Zwelithini was held.

After pleading for a last chance to sing for the late king, hundreds of amabutho were let into the royal palace.

An temporal exit had to be arranged for some dignitaries to leave the KwaKhetomthandayo royal palace after disgruntled Amabutho blocked the gate demanding to be allowed inside @TimesLIVE Videos: SANDILE NDLOVU pic.twitter.com/VdwCRwSL1l

An elder at the gate tried to reason with them that only the amakhosi would be allowed in, however they chanted, sang and danced and were adamant that they too belonged inside the palace as “strangers” (dignitaries) to the Zulu nation were allowed in.

When the gate was opened there was no commotion and no-one tried to stop amabutho as they went through singing praise songs.

After the memorial service, the dignitaries left the marquee and the royal family were expected to hold a private family meeting, where the late king's will was expected to be read. It is understood that this meeting will outline the succession plan going forward.

Scores of amabutho (Zulu warriors), traditional leaders, hospital staff and members of the public sang, danced and ululated as the body of the late ...
News
10 months ago

Only God knows who will succeed the Zulu king, says his sister

Princess Thembi Ndlovu, the sister of the late Zulu monarch, says only God knows who will succeed King Goodwill Zwelithini and that it is likely that ...
News
10 months ago
Next Article