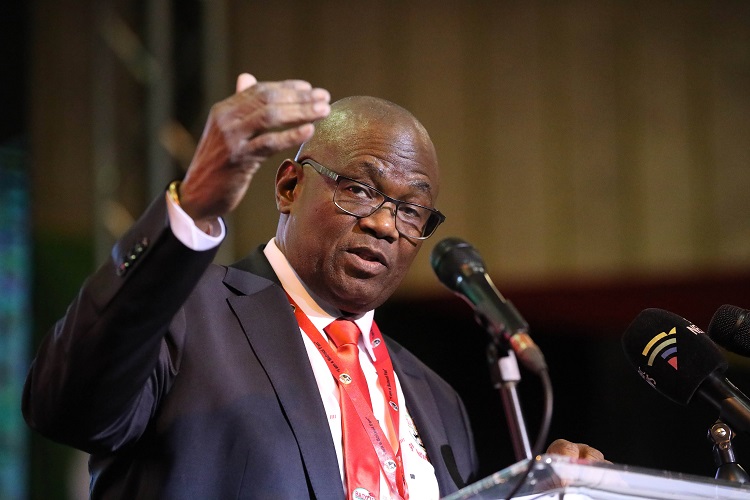 South Africa's pledge to curb its huge public sector wage bill and stabilise state finances has been praised by investors, but now comes the hard part -- convincing workers to back the plan.

At stake are efforts to narrow a record budget deficit and curb spiralling debt to avoid further credit ratings cuts at a time when rising global bond yields are pushing up borrowing costs, something junk-rated South Africa can ill-afford.

"The backbone of the government's plan to consolidate the fiscal accounts is to limit, or at least slow down, the pace of this public sector wage growth," said Marcelo Assalin, head of emerging markets debt at William Blair Investment Management.

"The risks lie here on execution, especially because there will be a very strong backlash from labour unions."

The plan to freeze wages has put the African National Congress-led (ANC) government on a collision course with its labour union partners.

The government baulked at paying 37 billion rand ($2.52 billion) in wage hikes for the fiscal year to end-March 2021 -- the last year of a pay deal struck in 2018. Unions took the matter to court but lost. An appeal has yet to be heard.

Latest pay demands include a salary rise of consumer inflation plus 4%. Annual inflation was 3.2% in January.

"We make an appeal to government to negotiate with us in good faith," said Mugwena Maluleke, a senior COSATU negotiator.

The Treasury declined to comment, citing the court case. But budget data shows a wage deal similar to 2018's -- 1 percentage point above inflation -- would create a budget shortfall from wages of 132.7 billion rand or 2.2% of GDP by 2023/24.

Public service wages sucked up 47% of revenues in 2020/21 compared to 41% in 2019/20, and as a share of output are some 5 percentage points above average for Organisation for Economic Co-operation and Development countries.

The Treasury has warned the sustainability of public finances will "depend heavily" on slowing wage growth.

Public sector unions want a general salary rise of consumer inflation plus 4% for all workers, a document they presented to the government showed on ...
News
1 year ago

South Africa's economy was in trouble even before the COVID-19 pandemic, with anaemic growth and bailouts to cash-strapped state firms squeezing the public purse.

"It's really trying to find a balance between this negative outlook and concern about execution risk and where the market is trading at the moment," said Wikus Furstenberg, portfolio manager at Futuregrowth Asset Management, which has 193 billion rand of assets under management.

The "standoff" was concerning, he added, but: "At the moment, there is nice carry in the market, yields are high, so you can't ignore that."

Government bonds are tracking a rise in global yields, with the 2030 yield up more than 50 basis points since early February. Debt-servicing costs are seen rising from 232.9 billion rand in 2020/21 to 338.6 billion rand in 2023/24, Treasury estimates show, making this the fastest-rising item of spending and eating up a fifth of tax revenue.

Finance ministry said on Saturday the ratings downgrade by Moody's and Fitch will increase the country's borrowing costs and constrain its fiscal ...
News
1 year ago

"Structurally we are very negative on South Africa, we think it will continue to be downgraded," said Anders Faergemann at PineBridge Investments, who expects another sovereign ratings downgrade in the next 24 months.

Fitch, which has a negative outlook on its BB- junk rating, said curbing wage growth would be "politically challenging".

"Let's see how things actually pan out," said S&P analyst Ravi Bhatia, pointing to the risk of upcoming local elections, where the ANC is trying to win back voters after losing its grip on key metropolitan areas in previous polls.

The backdrop is challenging. In the pandemic year of 2020, the economy shrank 7% -- its worst annual decline in a century. Unemployment is at a record high.

"The solution here is not how you cut up a tiny pie," said Marshall Stocker, portfolio manager at Eaton Vance, with $583 billion assets under management.

"The solution here is how do you make the pie bigger in South Africa?"

Taxes will increase as government needs extra R5bn in 2021/22

The government is projecting tax increases of R5bn in the next financial year as decreasing tax revenue and increasing debt to fund high spending ...
News
1 year ago

Minister lays out the ugly truth about SA’s debt crisis, saying we must cut spending or face disaster in 3 years
News
1 year ago
Next Article