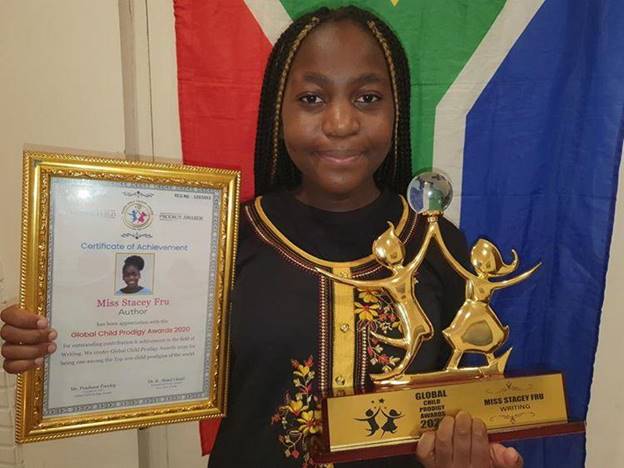 Child author Tracey Fru, 13, is among the 100 most influential South Africans in a list published by PR firm Avance Media.
Image: Supplied

Stacey Fru, a multiple award-winning 13-year-old author and activist, is the youngest person on a list of the 100 most influential young South Africans, released on Wednesday.

The list was put together by PR firm Avance Media.

The company said the 2020 list, which is focused on revealing the most hardworking youth, featured individuals who stood tall in their businesses and careers amid the Covid-19 pandemic.

Fru wrote her first book at the age of seven without telling her parents about her ambitions. In January last year she won a Global Child Prodigy Award in New Delhi, India, for her writing skills.

Fru has written books including Smelly Cats, Bob and the Snake, Smelly Cats on Vacation, Where’s Tammy and Tim’s Answer.

Thickleeyonce cashing in on Insta fame

Don’t be fooled into thinking Lesego “Thickleeyonce” Legobane's Instagram is just popping for mahala (nothing).
Entertainment
1 year ago

This year’s ranking features a record of 56 females, 43 males and a music group called Blaq Diamond.

MD of Avance Media, Prince Akpah, noted that the annual ranking of influential young South Africans continued to serve as an avenue for inspiration to all young individuals as they pursue excellence in their various endeavours.