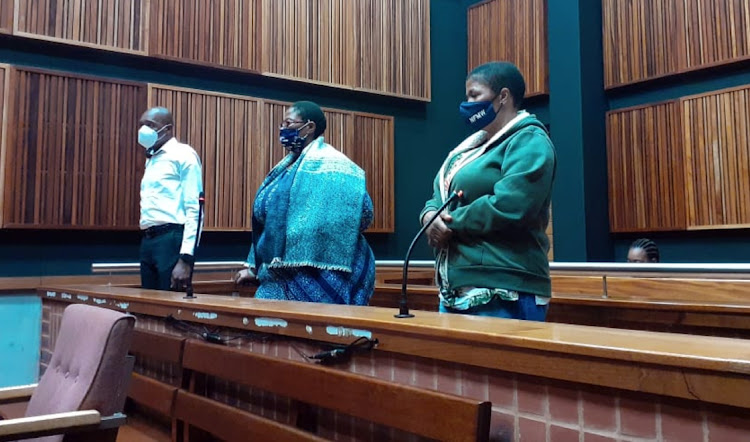 Three municipality employees have been found guilty of theft of municipal funds amounting to more than R3m of taxpayers’ money and the prosecution has asked for lengthy sentences.
Image: PROMISE MARUPENG

This came out when Jackie Tshabalala, 47, Letitia Mafuta, 51, and Anna Ndangane, 47, were found guilty on 16 counts of theft for transferring money from the municipality's bank account into their own personal accounts more that 16 times between 2017 and 2018.

In aggravation of sentence yesterday, state prosecutor Frans Mhlongo said the court found no compelling and circumstantial evidence that forced the court not to give the three lengthy sentences and setting an example.

"The three embezzled and abused public funds because it has become a norm for government officials and workers to feel entitlement to the state's purse," said Mhlongo.

Collins Chabane municipal manager Tsakani Ngobeni has joined the long list of those charged in the VBS Mutual Bank looting scandal as she is accused ...
News
1 year ago

"Accused number one [Tshabalala] and two [Mafuta] in the matter took the employer to the bargaining council after they were suspended and taken to a disciplinary hearing. Accuse number two further went to tell her seniors in the counsel that she thought the money was mana from heaven. While accused number three  [Ndanga], remained as quiet as a grave when she was an accomplice to the theft and carried on with her duties like nothing happened."

Mhlongo said Tshabalala, who was working in the municipality's finance department, took advantage of the trust of his employer and the public.

He said the money they took was meant for the poor who were dependent on government funds and services.

"Unlike many who have had to join the unemployment queue, the accused were equally permanently employed when they looted the funds. There is no excuse for their greediness."

Mhlongo said the theft of state funds undermines governance. "It sadly also delays development of  government projects and maintenance of roads, sanitation infrastructure, social services affecting all of us and directly the poor.

"The municipality had to put projects on hold because funds were stolen. Not only that, but they had to even adjust their budget."

Sandile Nkosi, the ex-wife of Bongani Bongo, has been added as an accused in his corruption and money laundering case in the Mbombela magistrate’s ...
News
1 year ago

Mayor Lindiwe Tshongwe of the troubled Metsimaholo local municipality in the Free State is once again facing a motion of no confidence after being ...
News
1 year ago
Next Article